Visit Basilica of Saint-Denis: the Burial Place of the Kings of France

Once you’ve decided to go, it makes sense to plan your visit to make sure you see everything inside. Read this quick guide on getting the most out of your visit.

The Basilica of Saint-Denis is one of the most important historical sites in France and a guided tour with a knowledgeable guide is the best way to learn about this impressive Gothic building.

When we visited Saint-Denis Basilica for the first time, we took the French guided tour (free for individuals) and we were impressed by the guide’s knowledge in arts and history. We learned so many interesting things about the history of France and the funerary art that we would repeat this tour right now!

There are also English tours only but on specific dates (check the Basilica’s website for the next scheduled dates). If you can’t make it, this private guided tour in English has very good reviews. 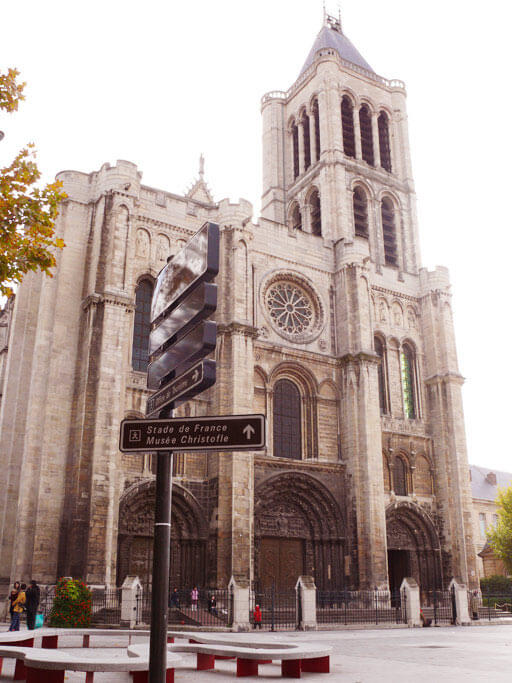 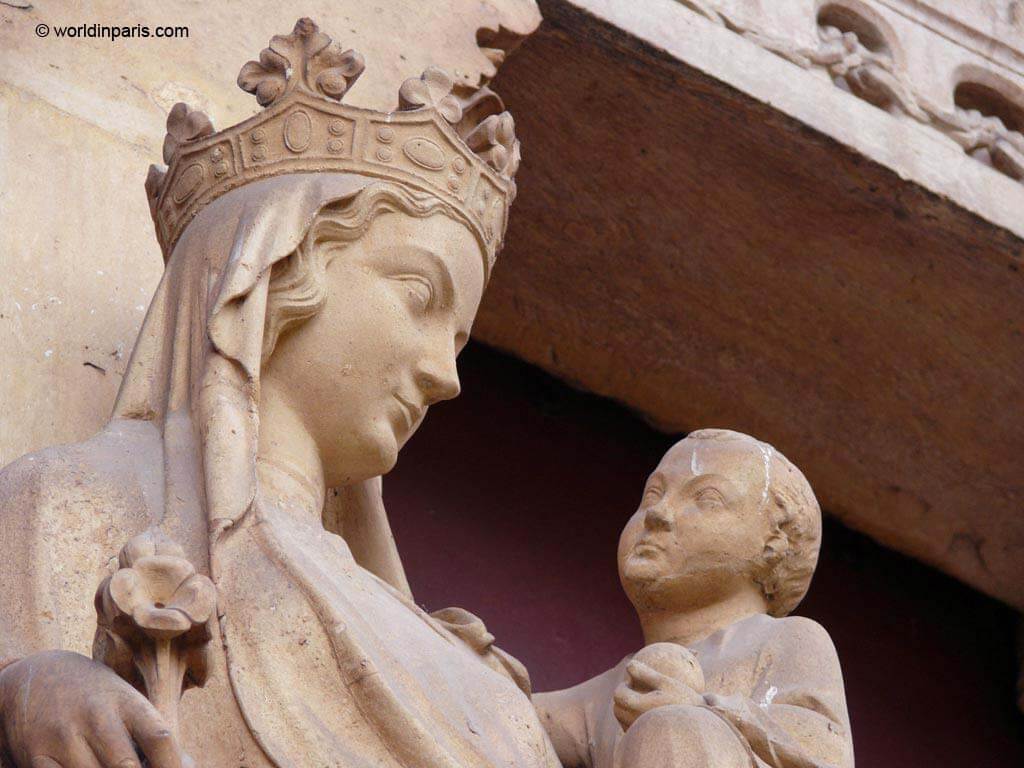 Saint-Denis has a special place in the History of France. This Gothic building is one of the three most important royal places in the country together with Paris (the capital) and Reims (the sacred city).

The Basilica of Saint-Denis stands on the site of a Gallo-Roman cemetery with the tomb of Saint-Denis, the first Bishop of Paris martyred around 250 AD. In the 5th century, a first chapel was built next to the cemetery.

During the following centuries, the place became a pilgrimage site and a monastic community settled and founded an abbey in Saint-Denis. The monks fed the pilgrims’ fervor with several legends, sometimes invented by themselves, and the site was very popular. Many important people, especially women, chose Saint-Denis as its final resting place to be close to the saint.

King Dagobert (603 – 639) was an important benefactor of Saint-Denis Abbey and when he died he was the first King to be buried in Saint-Denis. Some of his successors decided to continue with the tradition and in 754 Pepin the Short chose Saint-Denis also for his coronation ceremony. Saint-Denis was also the place where the French Kings came to pray and take the oriflamme before going to war.

Due to this royal connection, Saint-Denis became one of the most powerful Benedictine Abbeys in the Middle Ages and its monks became the official historians of the French Monarchy, writing the « Grandes Chroniques de France » since the 13th century.

The Birth of Gothic Architecture 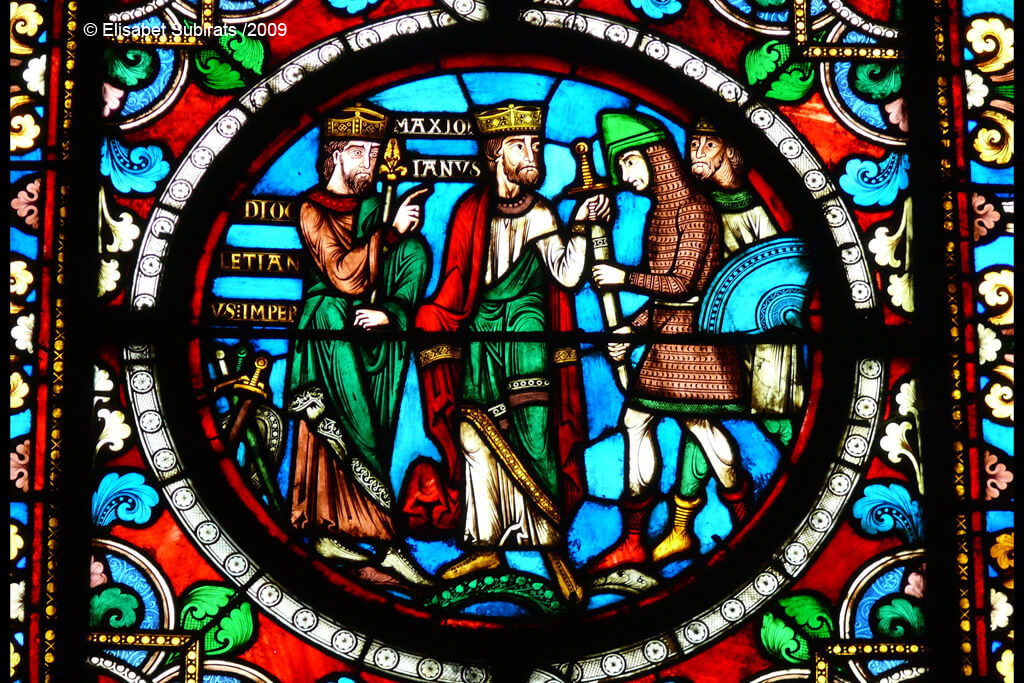 Saint-Denis also means the birth of the Gothic Architecture. In the 12th century, Abbot Suger decided to rebuild the choir of the Abbey using new and innovative architectural techniques which are considered today the basis of Gothic Architecture: the combination of the pointed arch and pointed ribbed vault and the play of light through stained glass windows.

If you want to appreciate the Basilica from an architectural point of view don’t miss the following elements: 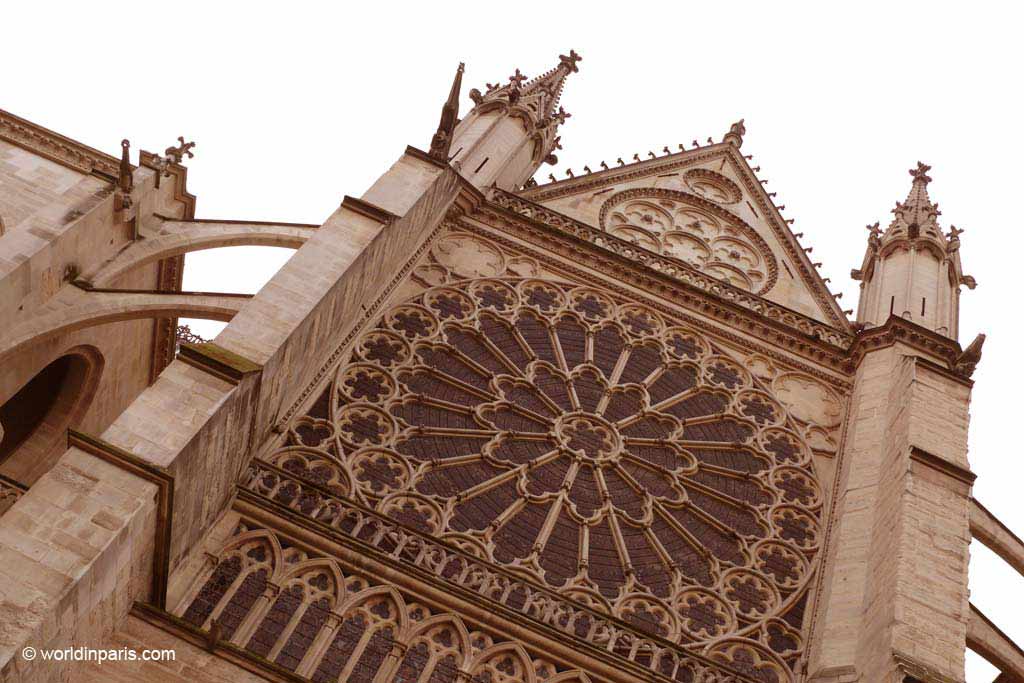 This is the very first Gothic facade in France. It has three portals (instead of just one which was the norm at the time), an inner narthex covered with pointed ribbed vaults and an impressive rose window.

The facade had two towers but the northern tower was destroyed soon after its construction by lightning. Before entering the church admire the facade’s medieval column-sculptures, also from the 12th century.

The Lower Part of the Chorus (12th century)

The increasing number of pilgrims started to be a serious problem for the small Carolingian crypt hosting Saint-Denis’ relics. For this reason, Abbot Suger decided to build a new chorus around the relics.

This new chorus had a forest of monolithic columns, supporting one of the first ribbed vaults to be successfully built. The lack of walls between the chapels and the doubling of the glass surface created an exceptional space that looked like a huge reliquary flooded with colored light. 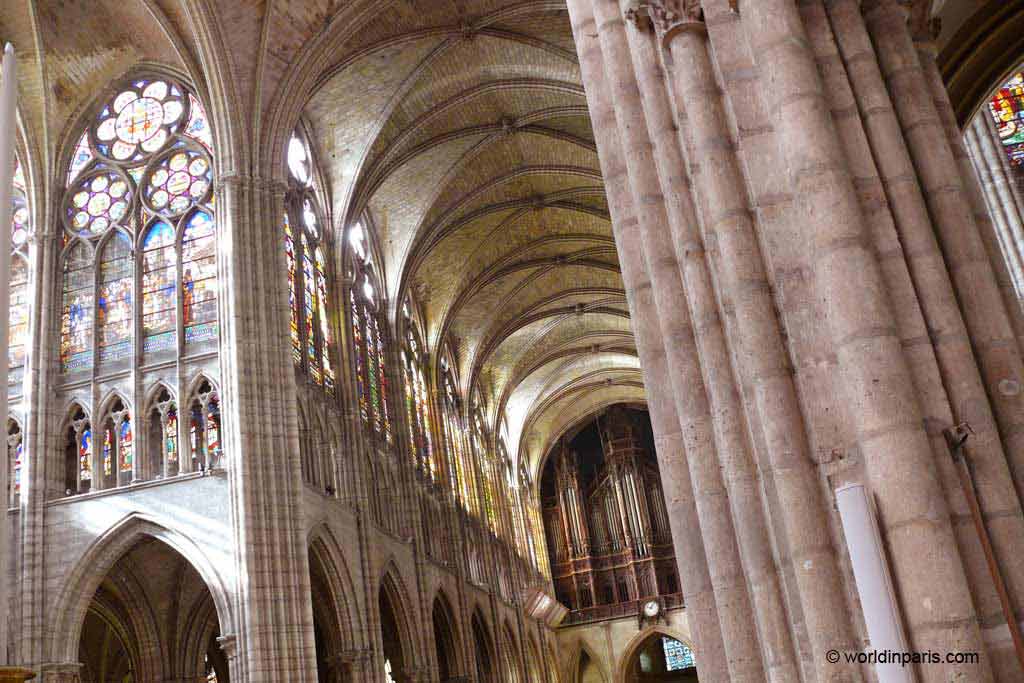 If the chorus meant the birth of the Gothic Architecture, Saint-Denis’ central nave represents the peak of this architectural style.

The dark Romanesque nave, with its thick walls and small window-openings, was rebuilt in 1231 using the latest techniques, in what is now known as Rayonnant Gothic.

This new style reduced the wall area to an absolute minimum: the pillars are thinner because the thrust exerted by the vaults was better distributed. Vast window openings filled with brilliant stained glass replaced solid masonry.

Walk around the nave (30m high) and enjoy the colorful light entering through the stained glass on a sunny day. For the creators of the Gothic style, the light was the symbol of divine revelation. The glare of the stained-glass windows served as a showcase for its manifestation and helped the faithful to rise to God.

According to some historical sources, the cost of making Saint-Denis’ stained-glass windows would have been higher than that of stone construction, which shows the fundamental role of light in Gothic Architecture. 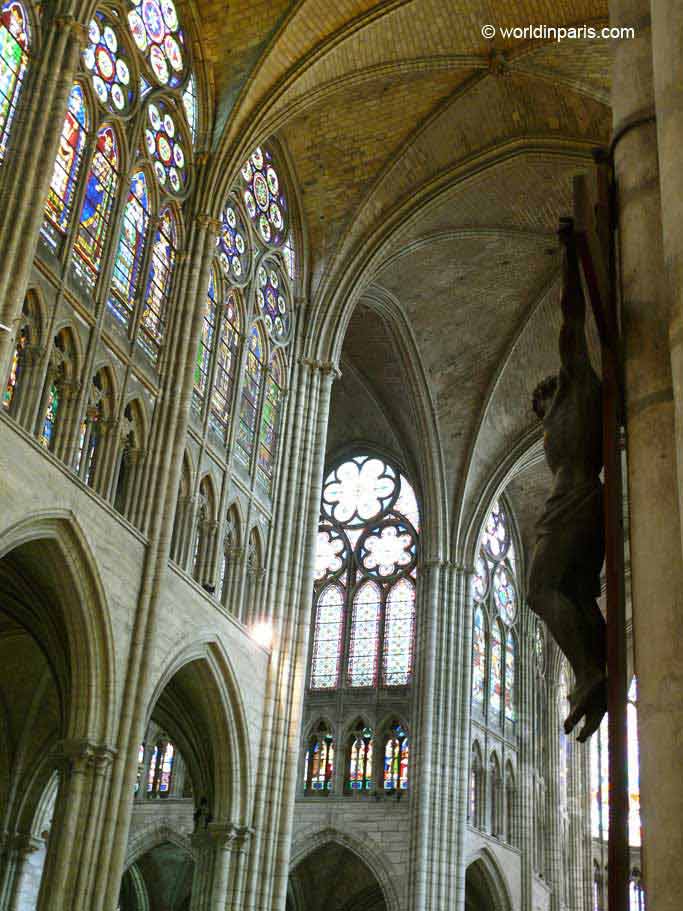 The Biggest Museum of Funerary Art in the World 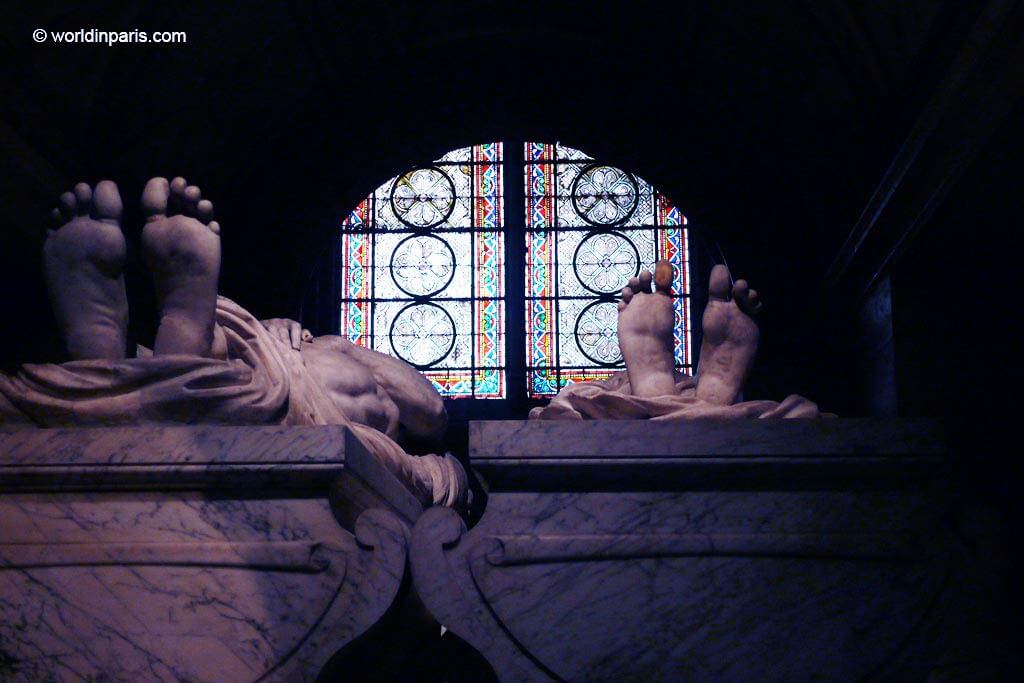 Most of all, the Basilica of Saint-Denis is the burial place of the Kings of France. Since the 13th-century the French Kings had 3 tombs, usually located in three different religious buildings: body tomb, heart tomb and entrails tomb.

Saint-Denis was the Royal Necropolis for body tombs while the entrails rested in Reims Cathedral. The hearts usually were moved to a church or abbey with sentimental links for the Kings.

Since King Dagobert, the Basilique of Saint-Denis became the French Kings’ burial place and each new dynasty continued this tradition in order to support its legitimacy.

King Louis XVIII was the last French King to be buried in Saint-Denis, in 1824.

More than 70 original tombs give us a complete idea of the evolution of the funerary statuary in France from the 12th century to the 19th century (click here to see the plan with the location of the tombs). If you don’t have the time (or patience) to see all the tombs, these are our musts: 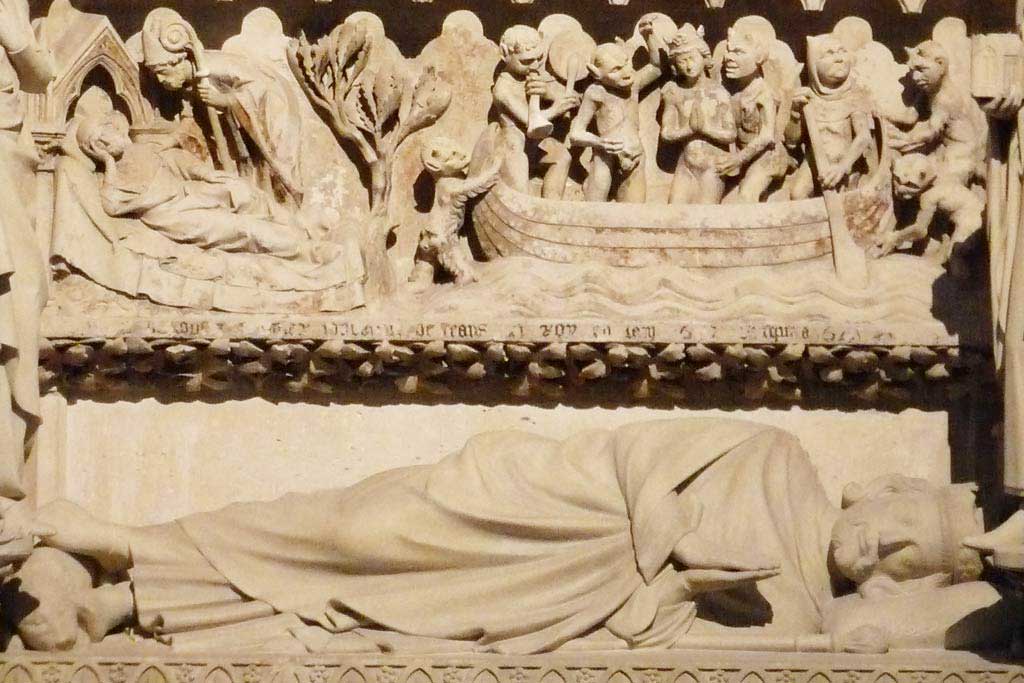 King Dagobert I was the first to be buried in Saint-Denis but the tomb that you can see today is not the original tomb of the 7th century.

In the 13th century, the monks of the Abbey built him a bigger tomb on three levels, more in accordance with the greatness of the King. The earliest sculptures of the 13th century show idealized recumbent figures of the deceased. King Dagobert looks towards Saint-Denis’ former grave and he is surrounded by his wife and his son, King Clovis II.

Above them, there is a depiction of the legend of the hermit Jean who had a dream in which King Dagobert’s soul was saved from demons in a boat by the combined efforts of Saints Denis, Martin, and Maurice.

Queen Isabelle’s tomb is one of the most beautiful tombs in Saint-Denis. This tomb is especially beautiful at certain hours of the day, when the multicolored rays of the stained glass get lost in the folds of the clothing that come alive. 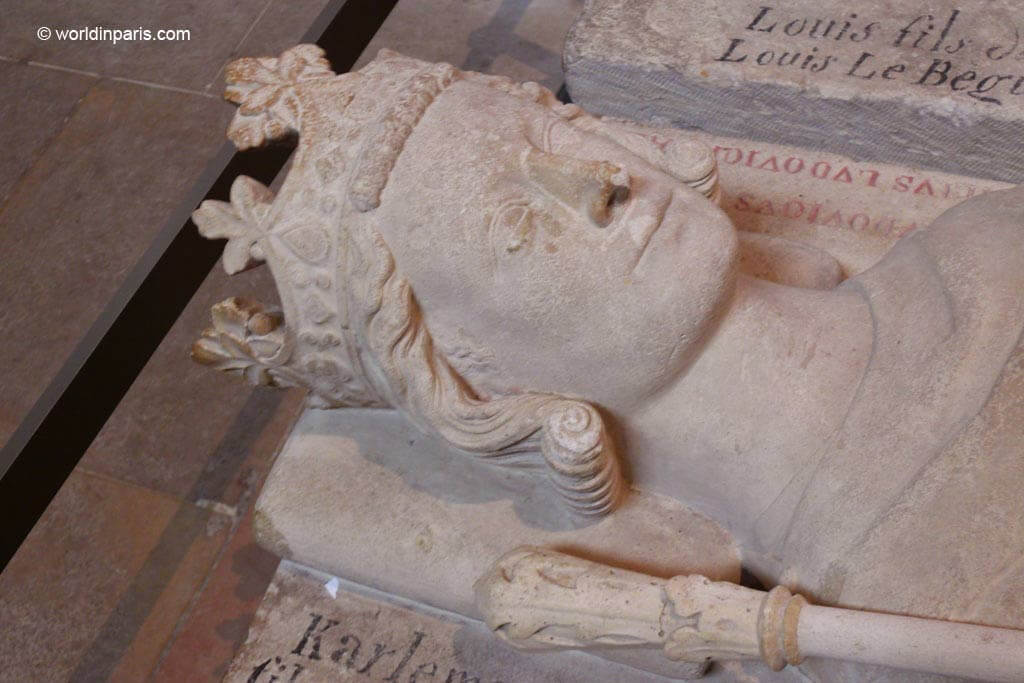 King Charles V tomb is considered the first official portrait in the history of funeral sculpture and a masterwork of medieval art.

His wife’s tomb, however, was destroyed during the French Revolution. What we can see today is her entrails’ tomb, coming from the Convent of Celestins in Paris after the Revolution. This is the only entrails’ tomb in the Basilica and you can easily recognize it by the little bag that she is holding in her left hand. 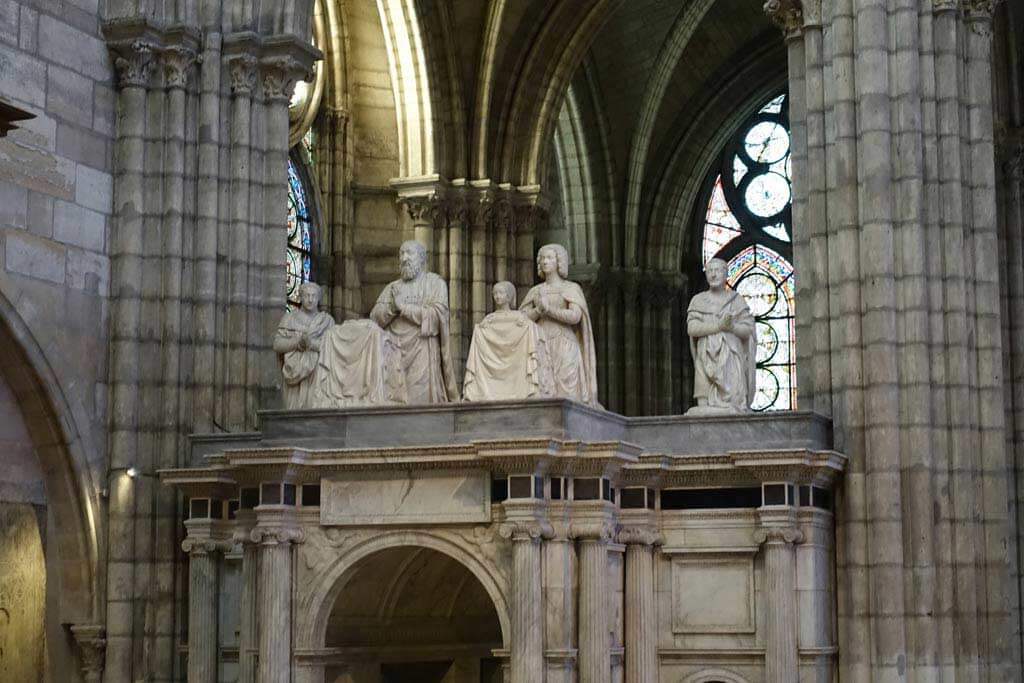 The tomb of King François I and Claude de France has two levels: on the lower platform, the royal couple is represented in real size with striking realism. On the upper platform, the kneeling sovereigns are accompanied by three of their children. These prayers express hope in the Resurrection but also the family character of the mausoleum.

The Basilica of Saint-Denis: Practical Info

The Basilique-Cathédrale de Saint-Denis is located in the commune of Saint-Denis, in the Department of Seine-Saint-Denis.

This sounds far, but actually you can reach the Basilica by Metro, line 13, stop Basilique Saint-Denis. The address is 1 Rue de la Légion d’Honneur, Saint-Denis.

The ticket to visit the Basilica costs 9.50 € and you can buy it here to skip the line. The ticket to Basilica of Saint-Denis is also included in the Paris Museum Pass.

The entrance is free for EU members less than 26 years old. There’s also free entrance for everybody on the first Sunday of the month, from 1st November to 31st March. 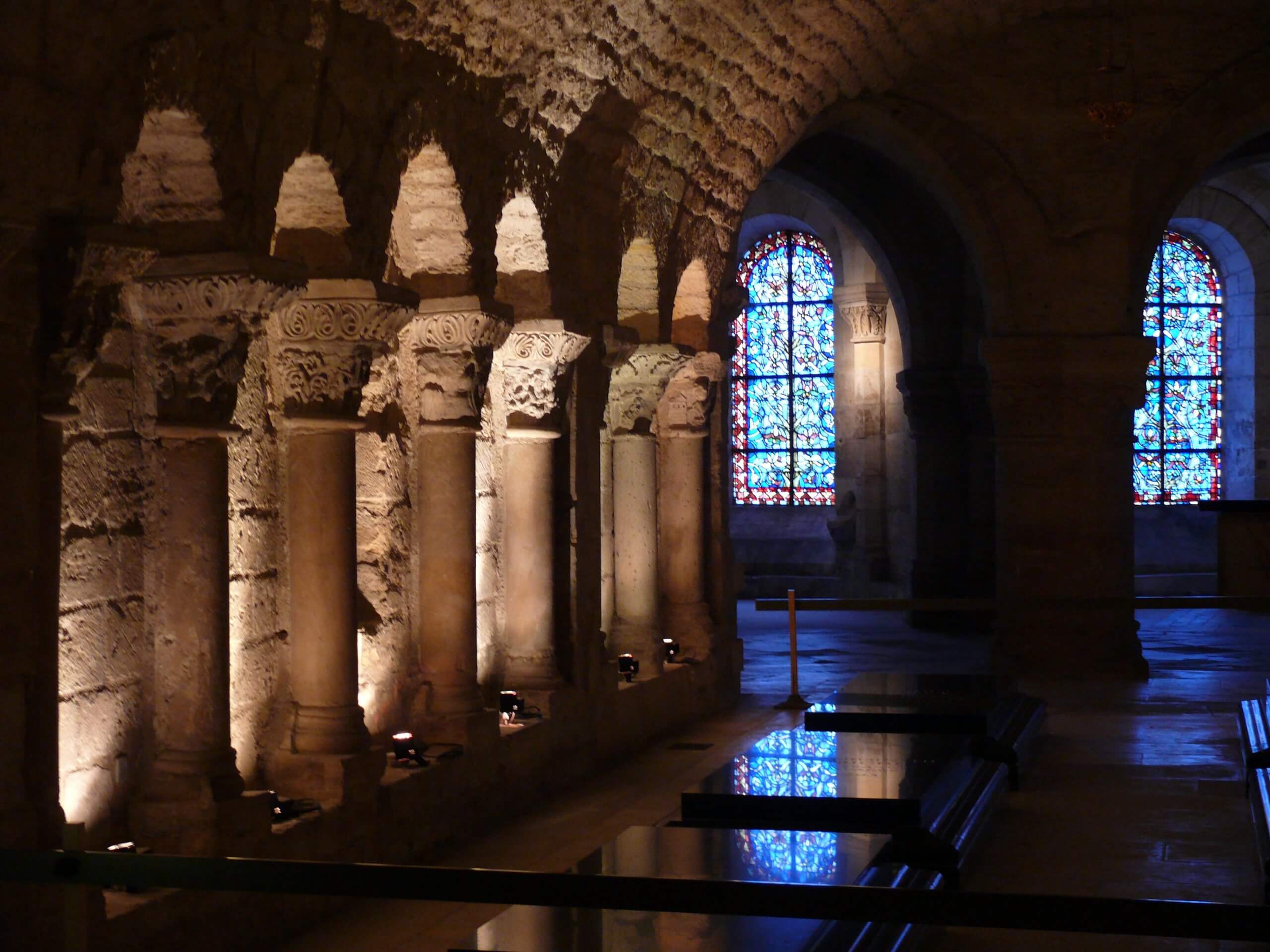 I hope these tips will be useful to appreciate the beauty and importance of Saint-Denis Basilica. Is there any important gothic church or cathedral in your hometown? 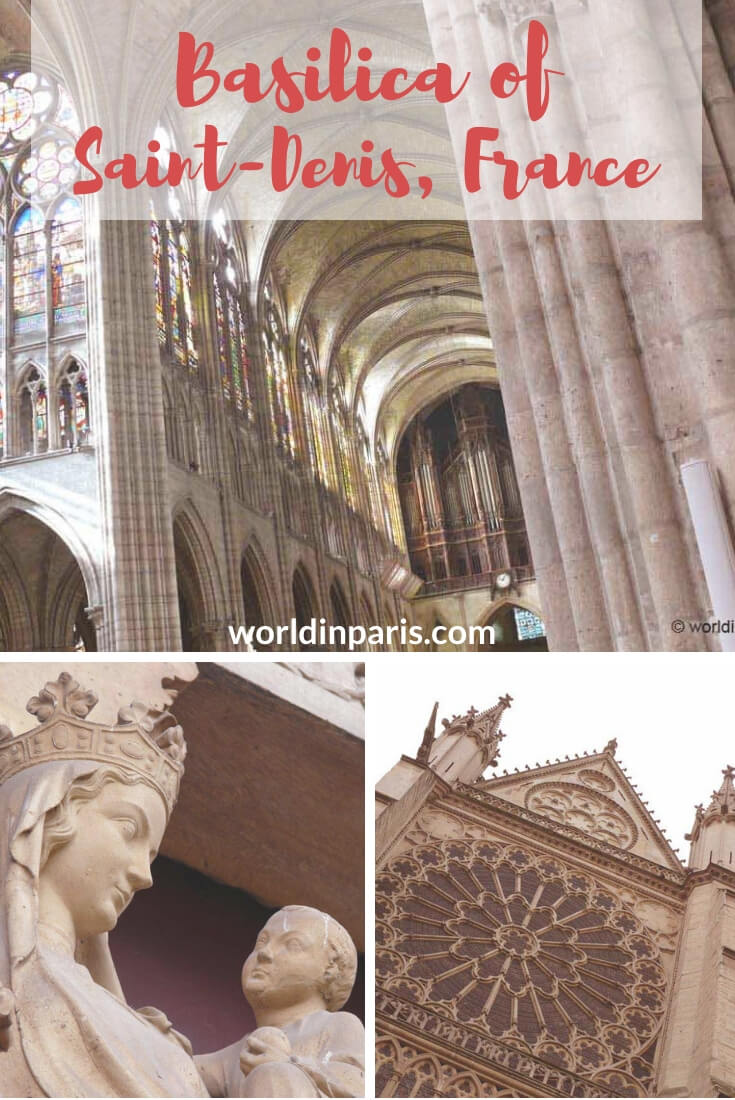