Now that you have read the Underground Paris Guide, we can talk about our favorite Paris Underground Tour, Les Carrières des Capucins. Amongst all the underground Paris tours, the former Capuchins’ Quarries outstands for its beauty and historical importance.

Les Carrières des Capucins is a medieval limestone quarry located under the Cochin Hospital, on the site of the former Capuchin Novitiate. The remains of this interesting network of galleries, 1.2 km long, are approximately 18m below the ground and cover part of the above Boulevard Port-Royal, the Cochin Hospital, and Rue de la Santé in Paris 5, 13 and 14.

This limestone quarry was exploited between the 12th and 17th centuries and it was consolidated in the 18th century. Today, the medieval quarry is maintained and enhanced by a non-profit association in the form of a museum. It is thanks to their great volunteer job that Les Carrières des Capucins became the first Paris underground site to be registered as Historic Monument, in 1990 (partially), and in 1999 (the whole site).

This unusual and rather confidential Paris underground tour, done under the light of a torch, unveils part of the city’s exceptional industrial heritage – the world of underground quarries – and some interesting curiosities.

This tour is also a step back in time: indeed, below the streets of Paris that we see today, the Paris of the 17th century still exists, tucked forever within the walls of Les Carrières des Capucins. 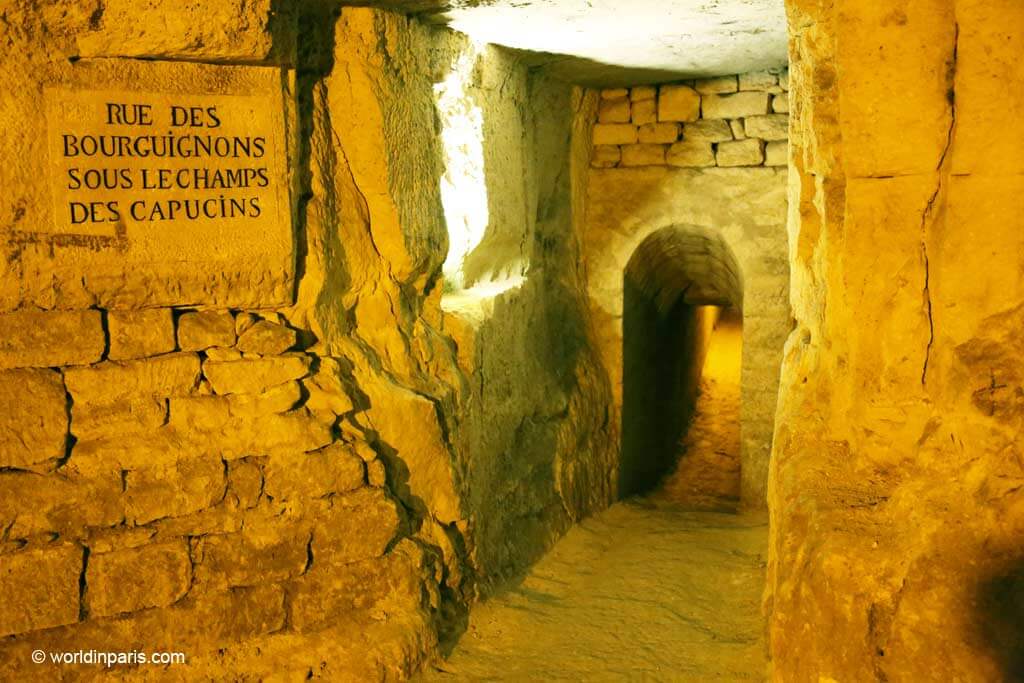 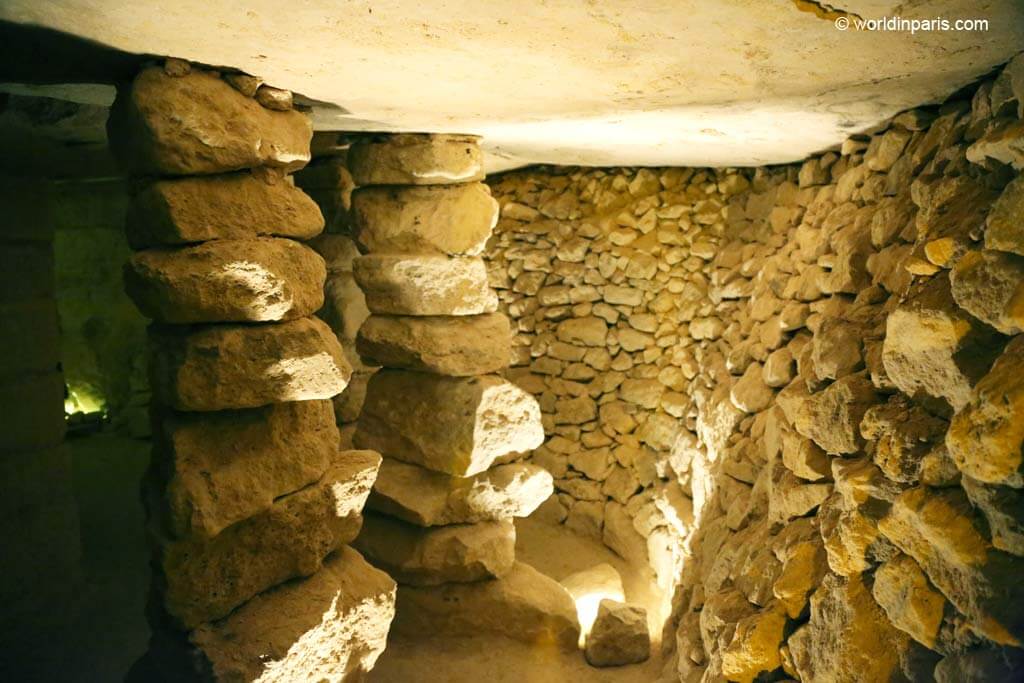 The Parisian region is particularly rich in limestone. Since the 1st century C.E, Romans started to exploit the Bièvre Valley to get enough stone for its civil constructions.

From antiquity to the middle ages, Parisians used the “open quarry exploitation” method which required simple resources but a lot of manpower. When stone became scarce on the ground, trenches were dug deeper and deeper and quarry-men started to go underground.

The underground quarries were exploited as long as good quality limestone was available. When there was no more stone to extract, quarries were closed and abandoned.

The history of the Inspection Générale des Carrières (Quarries’ General Inspection), starts in the middle of the intensive exploitation of the quarries in Paris and its region.

In the 18th century, the city’s subsoil and that of its suburbs were extensively excavated, leaving behind huge abandoned and barely indexed quarries. Paris was like a huge “gruyère cheese” and, inevitably, collapse (land, houses or even street collapses) started to happen.

After such disasters, the King created in 1776 the Inspection Générale des Carrières (IGC). This special service had the mission to inspect and consolidate the underground quarries to avoid more accidents. The Inspection Générale des Carrières also proceeded to the quarries’ study and mapping. What we can see today in the Quarries of the Capuchins is the result of their work. 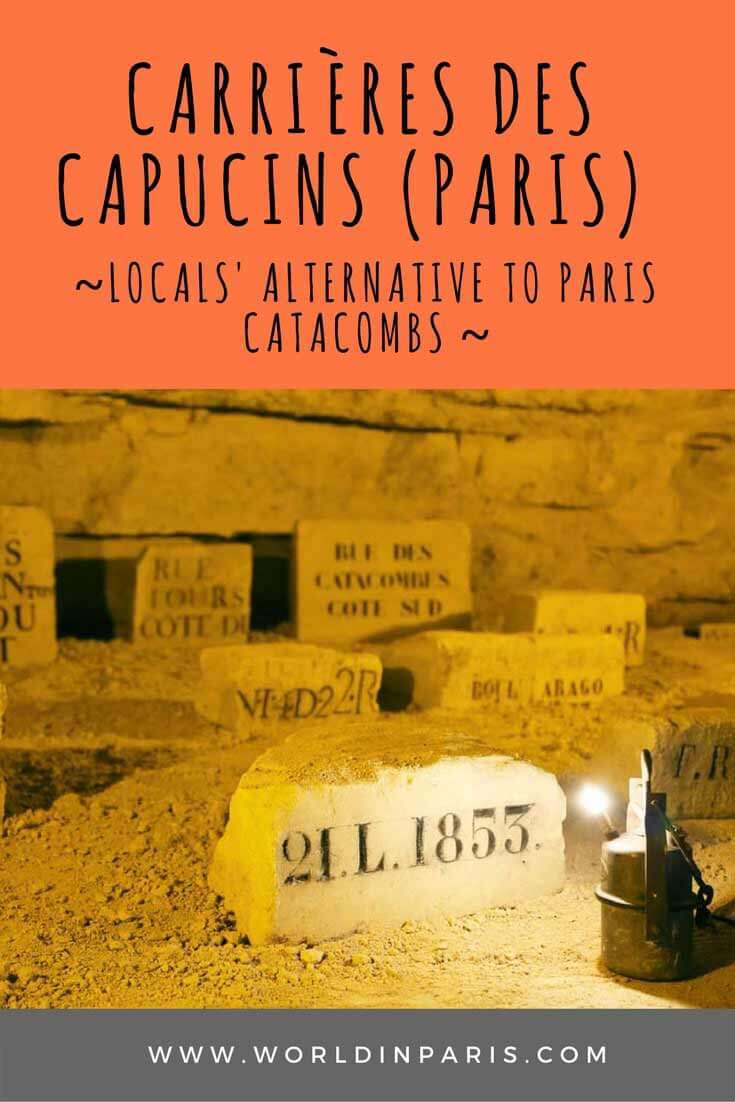 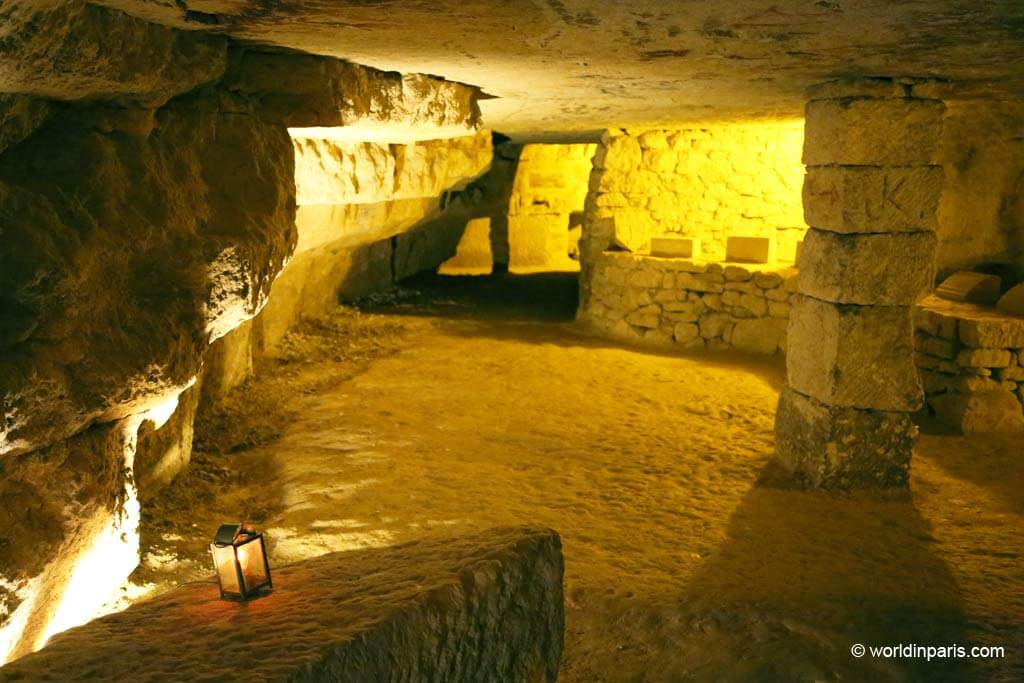 Visiting Les Carrières des Capucins is not easy. There are few tours (1 tour every 1-2 months) and they are usually scheduled only 1-2 weeks in advance.

The only way to join a tour (unless you are part of a local association) is to email them and ask to include you on the waiting list for the next visit. Guided visits (2 hrs, in French) are proposed only for small groups (15 people maximum) because they want to keep the intimacy of the place.

The meeting point is in front of Cochin Hospital, in the 14th District of Paris. Here, we are not far from the Catacombs of Paris, the most popular underground tour.

The visit to Les Carrières des Capucins starts climbing down some 200 steps. We are going to walk 18 meters below the streets of Paris, with a temperature of 13C° and 95% humidity so a jacket or a pullover + sturdy shoes are recommended. 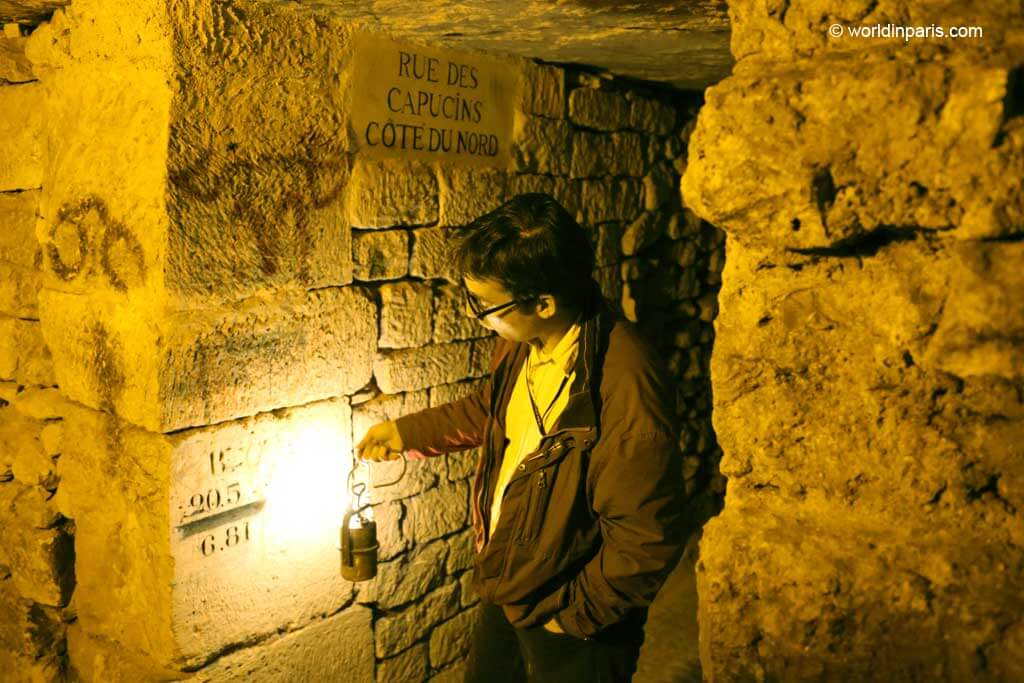 Paris underground was a reflection of the city above ground. This means that the underground galleries followed the same plot as the Parisian streets and they had the same kind of street signs than on the surface. While some old streets disappeared due to the Haussmannian works, they still exist underground with their original street signs from the 18th and 19th centuries.

In the picture above we can see Rue des Capucins. This street disappeared on the surface but it still exists underground. To help with navigation, the street signs were positioned according to the cardinal points just like on the surface. 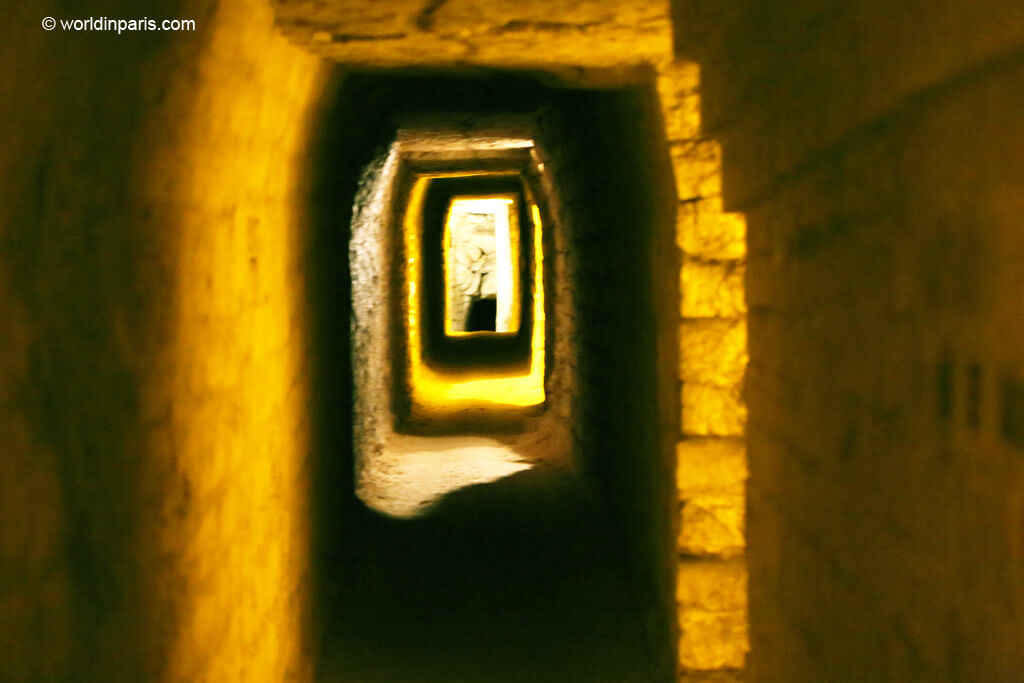 Stone Inscriptions (and a Couple of Fleur de Lis)

During the visit, we can see different stone inscriptions. Some stones had, for example, the Quarry Inspector’s monogram while others talk about different events happening in the city.

During the French Revolution, some carved stones were intentionally damaged to erase the Fleur de Lis, the symbol of monarchy. However, a couple of Fleur de Lis survived and we can still see them hidden in the galleries of the Quarry. Can you find the Fleur de Lis on the picture below? 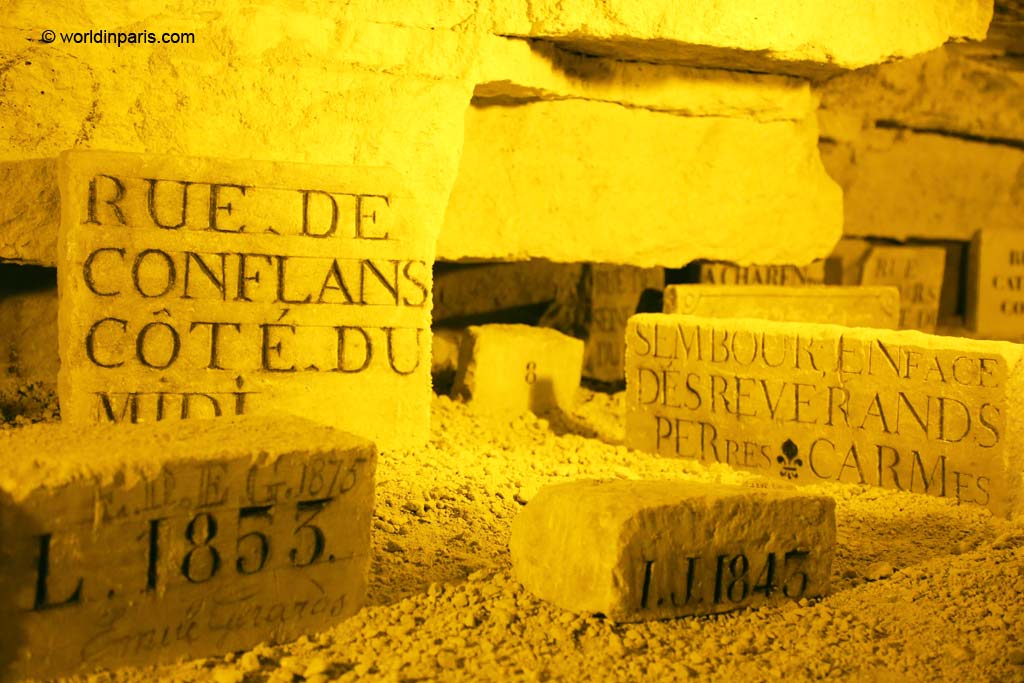 The 4D2 2R inscription on the picture below (second row) is a date of the Republican Calendar. This extravagant calendar, (also called Revolutionary Calendar) was created during the French Revolution to avoid any relationship with the religion or monarchy. Indeed, 2R stands for the second year of this Republican Calendar (1793). 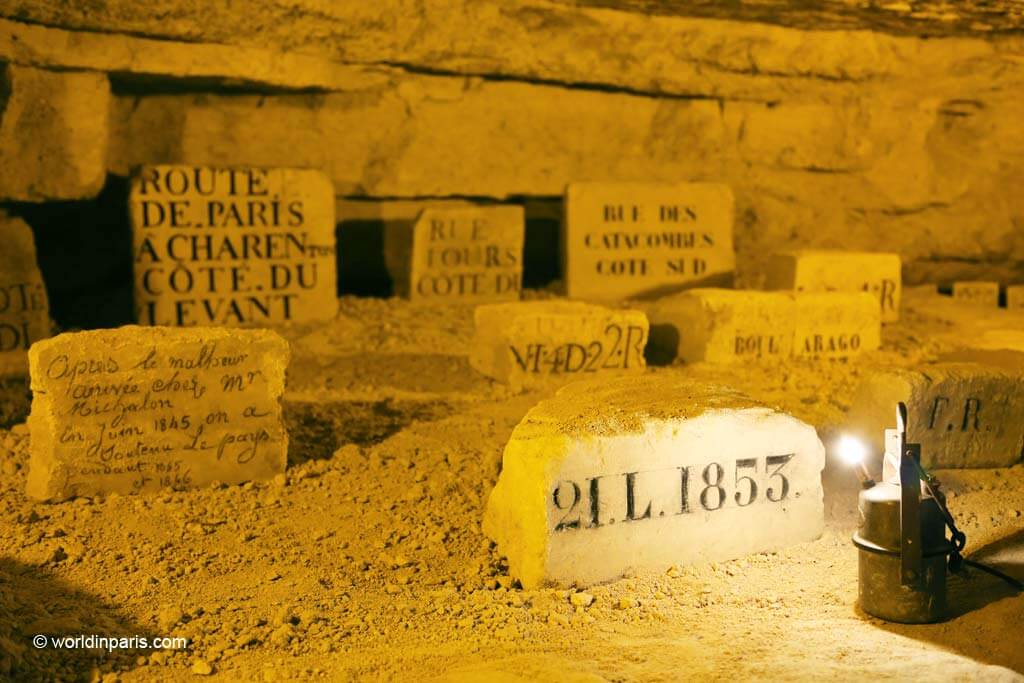 This Paris underground tour is full of interesting sights and quirky curiosities. There is, for example, the Capuchins Fountain (1810), which was used to measure the water table in this area and visitors still can see the carved scale with the metric system. 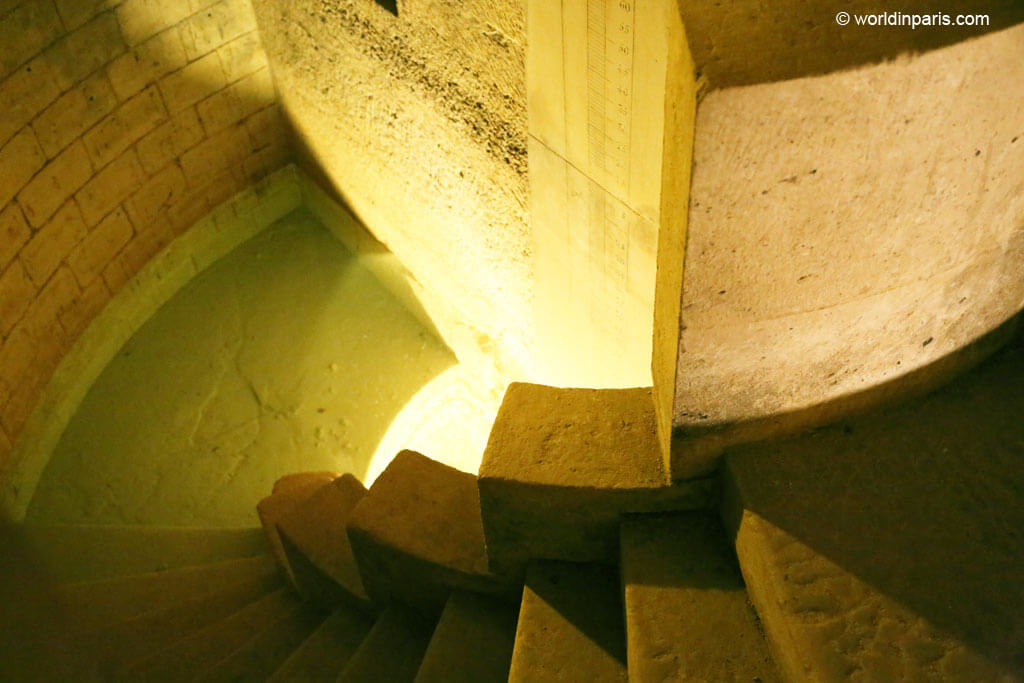 The picture below shows an inspection well (1841) and during the visit, it is also possible to see some of the former extraction wells.

The Quarry of the Capuchins is also decorated with contemporary sculptures done by the most talented members of the association. An example of these sculptures is the beautiful replica of the “Scala Philosophorum” located at Notre Dame’s entrance (Paris 4), on the main pillar. This sculpture has a strong symbology: it reminds visitors that part of Notre Dame was built with stones coming from this quarry. 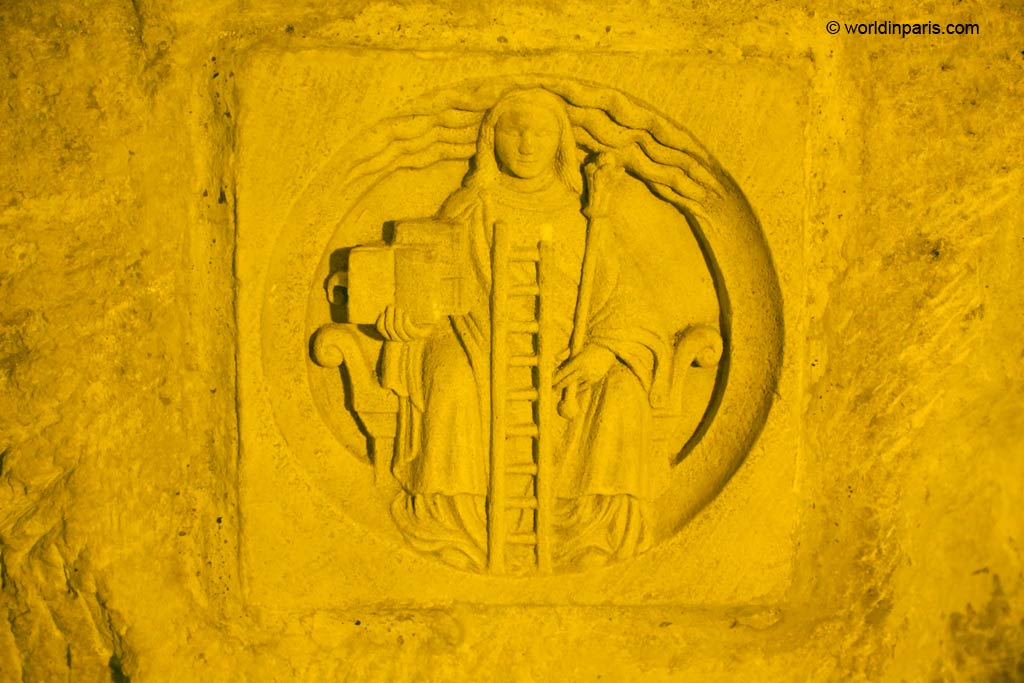 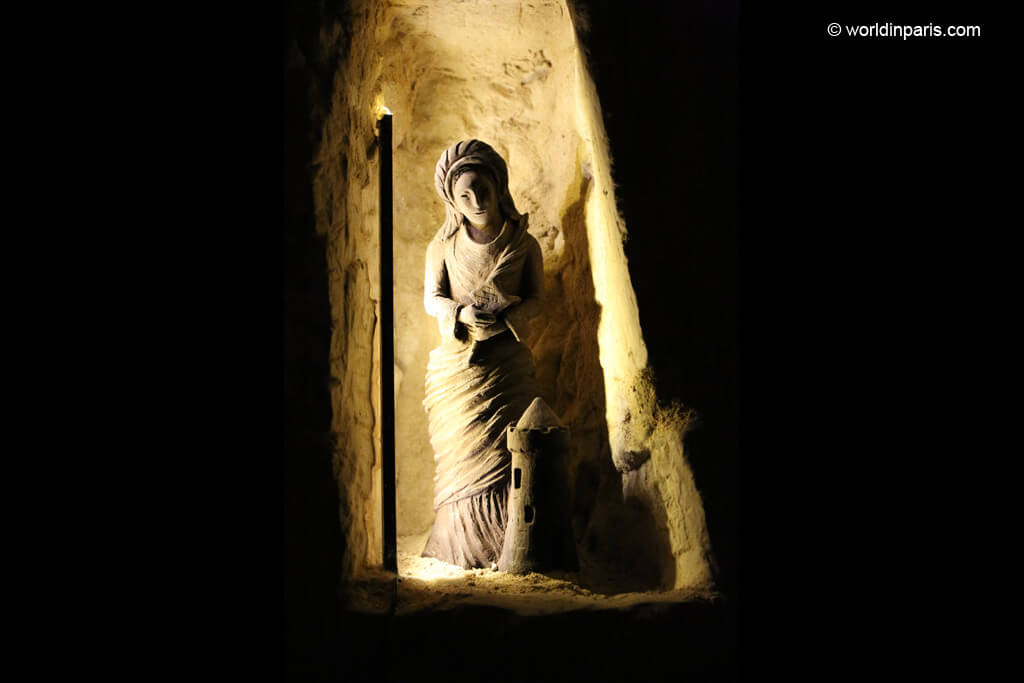 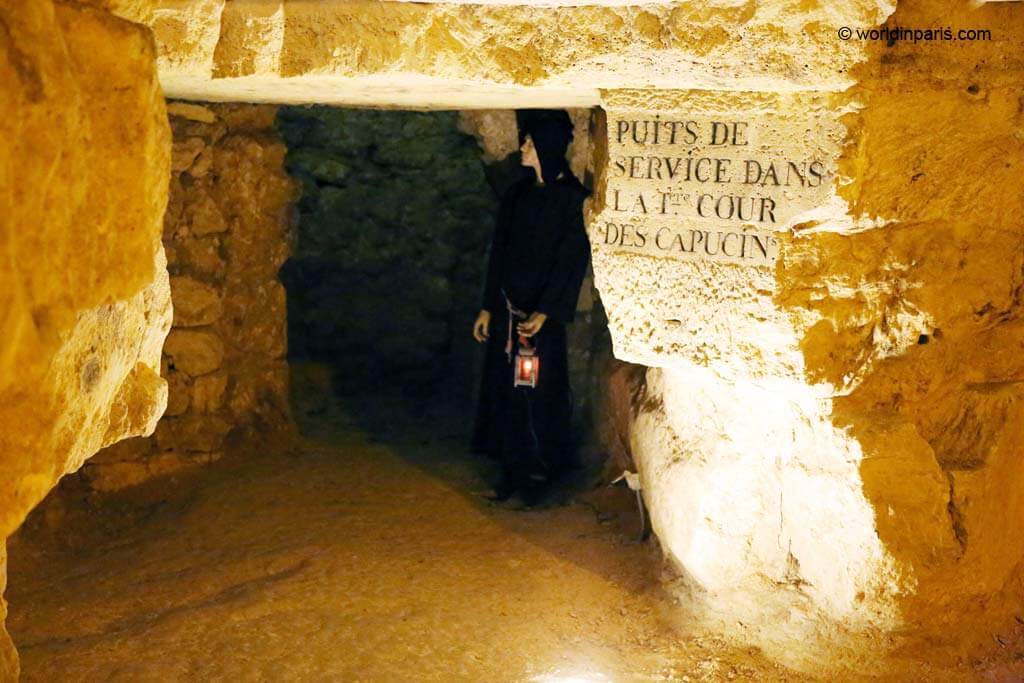 On the way, a Capuchin monk and quarry-man mannequins welcome the visitors at the entrance of two galleries. This is just a concession to one of the members of the association, who worked with mannequins in the past. He retired a long time ago but he still likes to play with mannequins and dress them like in the 17th century. Because he is always very kind to everybody, the association lets him place his mannequins here and there.

Finally, visitors can also see a “cabinet minéralogique” (=mineral cabinet of wonder) with the quarry’s different geological layers carved on a scale.

The History of the Champignons de Paris (Button Mushrooms)

At the beginning of the 19th century, the intensive exploitation of the quarries was banned and the underground quarries were abandoned.

At the same time, in 1814, a market gardener in Rue de la Santé, called Chambry, had the idea of ​​exploring the old quarries located ten meters below his gardens. Apparently, the well which served as access had filtered horse dung. The man was surprised to discover a superb swarm of mushrooms on it, he harvested them and decided to abandon his vegetable gardens to invest himself entirely in the underground cultivation of the mushroom.

The lucky discovery turned into mushroom farming very fast. The customer demand was so high that all the Parisian quarries were transformed into underground culture fields for button mushrooms. Some of the first mushroom farmers were former quarry-men and they entered the closed quarries through the air wells. Quarries became soon as prized as when they were used for stone extraction, with a total production of around 2,000 tons of button mushrooms a year.

Today, the only mushroom farms of this kind are located in the departments of Oise and the Yvelines in Ile-de-France and the access is via gentle slopes or hollows. 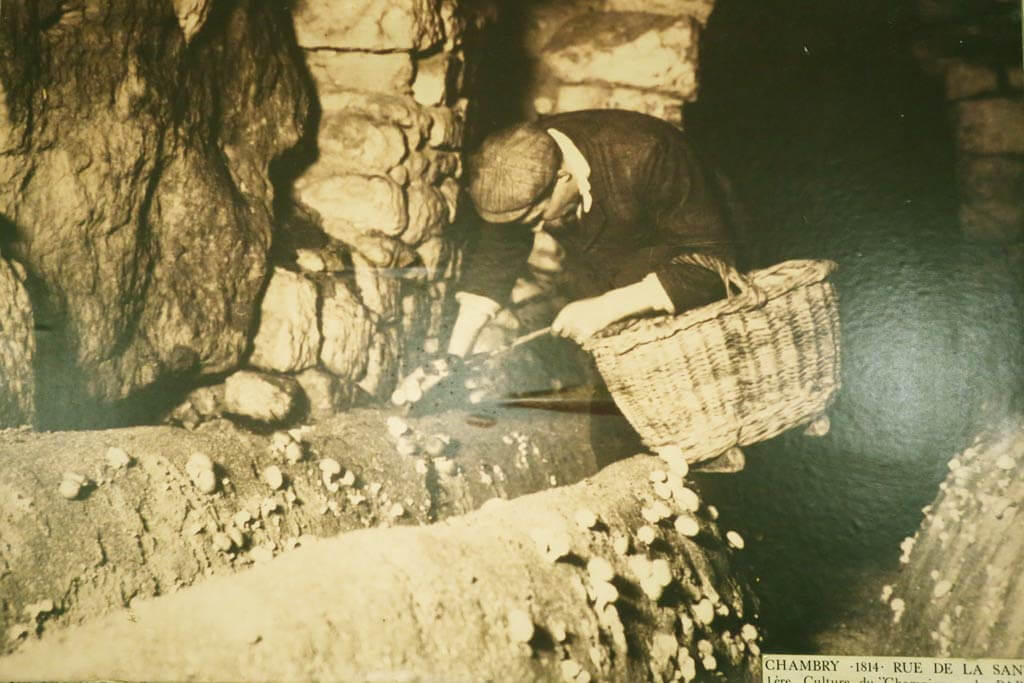 Did you like this visit to Les Carrières des Capucins? What is your favorite Paris Underground tour?