La Coulée Verte, Paris (also known as La Promenade Plantée) is a public park built on a historical rail line in eastern Paris. Saved from demolition by neighborhood residents and the City of Paris, the Coulée Verte opened in 1993 as a hybrid public space where visitors experience nature, art, and design.

Few Parisians know about La Coulée Verte located in the 12th Arrondissement of Paris. And it is a pity because this free, 5-km stroll from Bastille Square to Bois de Vincennes is a very scenic walk, perfect for escaping Paris’s hassle without leaving the city.

The Coulée Verte is one of our favorite secret places in Paris. Click here for the list of the most beautiful hidden gems in Paris.

While the Opera Bastille replaced the Bastille station, the viaduct was converted into glass-fronted workshops and boutiques for local artisans (the Viaduct des Arts), and the old rail tracks became La Coulée Verte of Paris.

La Coulée Verte is a nature walk that crosses tunnels, trenches, and parks. At times elevated 10 meters above the streets of Paris, La Coulée Verte was the world’s first elevated park walkway that later inspired the Highline in New York City.

How to Visit the Coulée Verte

The best way to experience the Coulée Verte is to wander, though as you explore, you may want to linger at some of the park’s most distinctive spots listed below.

We like to walk La Promenade Plantée in the summer to escape the high temperatures, and it is also lovely to explore under the fall colors. The pictures on this post were taken in July and October to see La Coulée Verte of Paris through the seasons.

We have split this stroll into short sections, walking from east to west. For each section, we give you the walking distance, the closest metro station, and the closest Vélib station (click here for the Velib map) in case you are moving around Paris by bike.

This itinerary starts at Rue de Sahel, but you can access La Promenade Plantée where you want, thanks to stairs and lifts all along the way.

We access La Coulée Verte through Rue de Sahel /Avenue du General Michel Bizot. After walking some meters, we reach the section built in a trench, leaving the city’s hassle above us.

This is a beautiful section – my favorite part – very green and with lush vegetation. This part is also accessible to bikers, rollerbladers, and skateboarders and it goes through two short tunnels beautifully illuminated.

This part ends with a third long tunnel, Le Tunnel de Reuilly. At the end of this tunnel, the section heads to the street level.

Allée Vivaldi is a kind of pedestrian avenue with trees all along its way. We like to walk it in October- November because the trees with the fall colors are magnificent.

Along this avenue, we can still see the ancient Gare de Reuilly, one of the train stations of the former Vincennes Railway Line. In the picture below, you can see how it looked like when the line was still working. Today the train station is used for social events.

At the end of this alley, it is necessary to climb some stairs to reach the Reuilly Garden bridge.

This is another cool part of la Coulée Verte. In this section, the path runs along an elevated walkway 10 m above Jardin de Reuilly.

Perhaps this part of the walk reminds you of New York’s High Line? Well, you are right! The Promenade Plantée, inaugurated in 1993,  was its source of inspiration.

In the summertime, Jardin de Reuilly is packed with people enjoying a picnic on the grass or sunbathing. In contrast, in the fall, this garden is usually enjoyed by a few lonely walkers.

This is the last part of this beautiful nature walk in Paris. At one point, the walkway runs through a modern building, which is very cool! Walkers are still above the street level, and it is interesting to see the surrounding architecture from another point of view.

For example, there is a relatively modern building with reproductions of Michelangelo’s Rebellious Slave, today part of the Louvre collections. These slaves are 2 floors high!

I like to describe this part as a ‘hanging garden,’ with some water bodies, different kinds of flowers and plants, and some shady spots to take a break.

There are never many people around, so even if it is a narrow stretch, it is nice to stop and sit in the shade for a break.

At the beginning of the ’80s, the City Council decided to keep and restore this place and dedicate it to arts & crafts. And that’s what you see today:  ateliers, workshops, cute cafes, and galleries have taken up residence in the vaulted arches below the garden.

Once you are done with this part, it’s time to go to Bastille Square and the surrounding streets for a more than deserved drink.

Did you enjoy this scenic nature walk in Paris? Are there similar walks in your city? 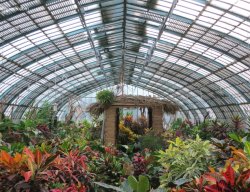 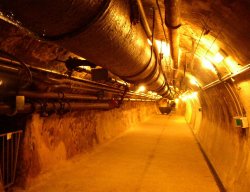