Most Popular Posts• Paris Hidden Gems• Paris Like a Local 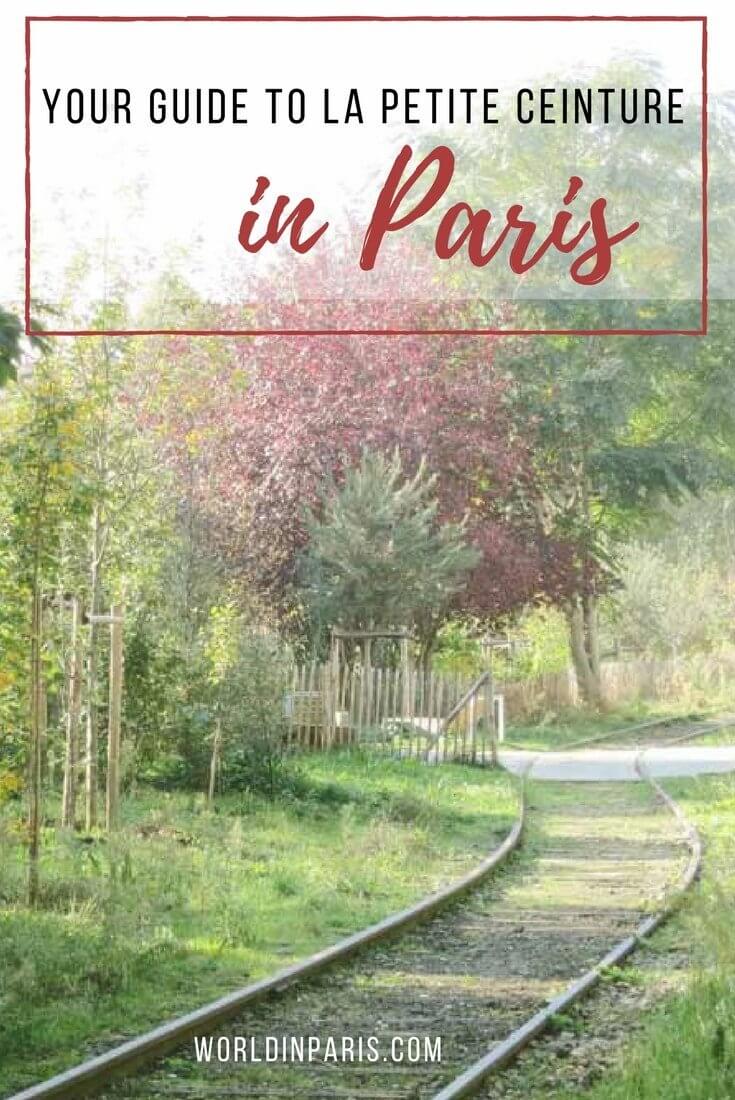 La Petite Ceinture Paris is one of the best-kept secrets of Paris. If you like to explore Paris’s hidden gems and the romance of abandonment, these abandoned train stations, and railroads in the heart of Paris are for you.

A LITTLE BIT OF HISTORY

La Petite Ceinture Paris (the Little Belt railway around Paris) was a 32 km railroad line that circled Paris, developed during 1852-1869. Originally built to transport material goods from depot yards to the core of Paris, “Le Chemin de Fer Petite Ceinture” became since 1862 also a service for passengers. At the height of its activity, there were steam trains charging in each direction six times per hour.

La Petite Ceinture’s decline started with the construction of the Parisian Metro in 1900. As a result, the passenger service stopped in 1934, when the metro reached its maturity. At the end of the 70’s, with the disappearance of the slaughterhouses of Vaugirard, the cattle station of La Villette and the relocation of the Citroën factories, the freight traffic fell drastically and La Petite Ceinture stopped operating.

Today only four short sections of abandoned railroads are converted into green spaces and opened to the public in Paris 12, Paris 13, Paris 15 and Paris 16. This article is the result of different day-expeditions walking on railroad tracks to explore these public spaces, to explore the backyards of the City of Lights.

Unfortunately, it is not possible walking on railroad tracks without any interruption. This is because some kilometers in the west are reused by RER trains and some tunnels are sealed. To do the tour presented below we are going to combine bike rides with some walking on train tracks.

This short section (200 meters) was developed to accommodate a shared garden and a nature trail (=sentier nature). Along the nature trail, we can discover the city’s biological diversity: grassland, coppice, and afforestation.

This section of the 12th Arrondissement is linked to the Coulée Verte Paris. If you are around don’t miss the opportunity to explore this cool green walk!

This section, located between the parks Charles-Trenet et Moulin-de-la-Pointe, opened only in January 2016 so it is a very new sight for Parisians. Along 500 meters, these abandoned train tracks are the common thread of an unusual landscape formed by flora and fauna typical of industrial wastelands. In addition, there is a chill-out area with grassland and some chaise-longues that should host some performances or events in the near future.

In Paris 15th Arrondissement la Petite Ceinture served the Citroën factories (Parc André Citroën today) and the slaughterhouses of Vaugirard (Parc Georges Brassens). On this leg, the old railway track was never deferred. In addition, the development carried out by the City Council consisted in keeping the historic installations while preserving the flora and fauna (more than 220 species of plants and animals) installed spontaneously on the site.

Along the 1,3 km walk, we can see an abandoned train station, a couple of wooden chalets and some train signs. As you can see in the pictures, la Petite Ceinture is also a playground for graffiti artists. Any flat surface is completely covered with colorful paintings. Finally, some information panels located here and there help us to appreciate the existent flora better: grassland, coppice, wastelands, and afforestation.

If you can only do one part of these abandoned railroads, we suggest La Petite Ceinture Paris 15.

This 1,2 km section links Porte d’Auteuil to La Muette. Deferred in 1993 and completely abandoned, it was quickly colonized by a wild nature which makes a formidable “ecological corridor” for plants and animals.

This walk is especially pleasant in the summer time and probably the most interesting one for nature lovers. Take the time to read the information panels about the incredible diversity of this ecosystem: grassland, wetland, limestone slopes, afforestation.

While la Petite Ceinture Paris 16 is a beautiful section to see, I never had the feeling of exploring abandoned railroads when walking through this section because there are no rails or original installations left. It just looked like a small beautiful forest to me.

Back to our bicycles, we leave Paris 16 direction to Paris 18. On the way, we can see another section of the Paris Little Belt, along rue Navier (Paris 17). On this street, there is an abandoned train station but also in-ground platforms bounded by solid poles and a couple of tunnels. Here everything is covered by obscure graffiti. The ensemble is phantasmagorical and a little bit disturbing. We did not find an entry point to go down to the rails but I am not sure I would like to explore this part closer!

We reach Porte de Clignancourt (Paris 18) at lunchtime. Here we find the old railway station of Ornano which after years of abandon was converted into a very cool community space but without losing the “old railway station” feeling. La REcyclerie Paris (83 boulevard Ornano) is a kind of canteen /restaurant but it is also an urban farm, a cultural space and a “do it yourself” reparation workshop. You can find more information about la REcyclerie Paris on our page Yummy Paris.  For the moment, we are only interested in their food and we order their generous brunch (there is also a vegetarian option).

One of the station’s old platforms belongs to la REcyclerie Paris. This is where we can find the urban farm, a small garden, and a terrace. On the opposite platform, there is a shared garden managed by a local association. Unfortunately, the access to the rail tracks in this section is opened only in few occasions, usually related to Nature festivals or events.

The fence along rue André Danjon can be opened or climbed on some points. This is not an official section and we are not supposed to be here. But pssst, this part is super cool!  Furthermore, in this section we are in Paris off the beaten track, walking on train tracks and enjoying some street art and a little bit of nature. We can even walk above the Canal de la Villette and enjoy this area from another point of view.

Inside Parc des Buttes Chaumont, right after the bridge which crosses the rails (on the left side), there is a little path going downhill. You can reach the rails through a hole in the fence which follows this path.

This is the most adventurous section, an opportunity to explore Paris underground. Same, this is not a public section but the rails that we can see from the park are so tempting! Along this section, there are three long tunnels to cross so take a pair of good shoes and a torch.

The first meters of this section are very cool. After some hesitation, we decide to walk into the tunnel. The air is strange inside so if you have breathing problems avoid going further. We don’t suggest going alone either.

When we exit the first tunnel (1.2 km) we are in Paris 20. There is a cool area with some urban furniture and street art. I am happy that a group of teenagers is walking not far from us because the tunnel was scary. Some meters further we enter the second tunnel (1.3 km) which goes below Père Lachaise Cemetery!

After the second tunnel, there is another old railway station, above on the street level. Today La Gare de Charonne (1867-1934) is a modern concert hall called La Flèche d’Or (102 bis rue de Bagnolet). You can see how it looks from the rails in the slideshow below.

The railway line crosses all Paris 20. The last abandoned train station in this district has some cool graffiti around. As you can see in the pictures we are not alone. Curious locals, street artists, and vagabonds are frequent in this area.

Finally, we are back in Paris 12 where we started. We leave the world of abandoned train stations and railroads at Villa du Bel Air, happy to have completed the tour.

READ: looking for more unusual places in Paris? Check out this cool list by Beer and Croissants 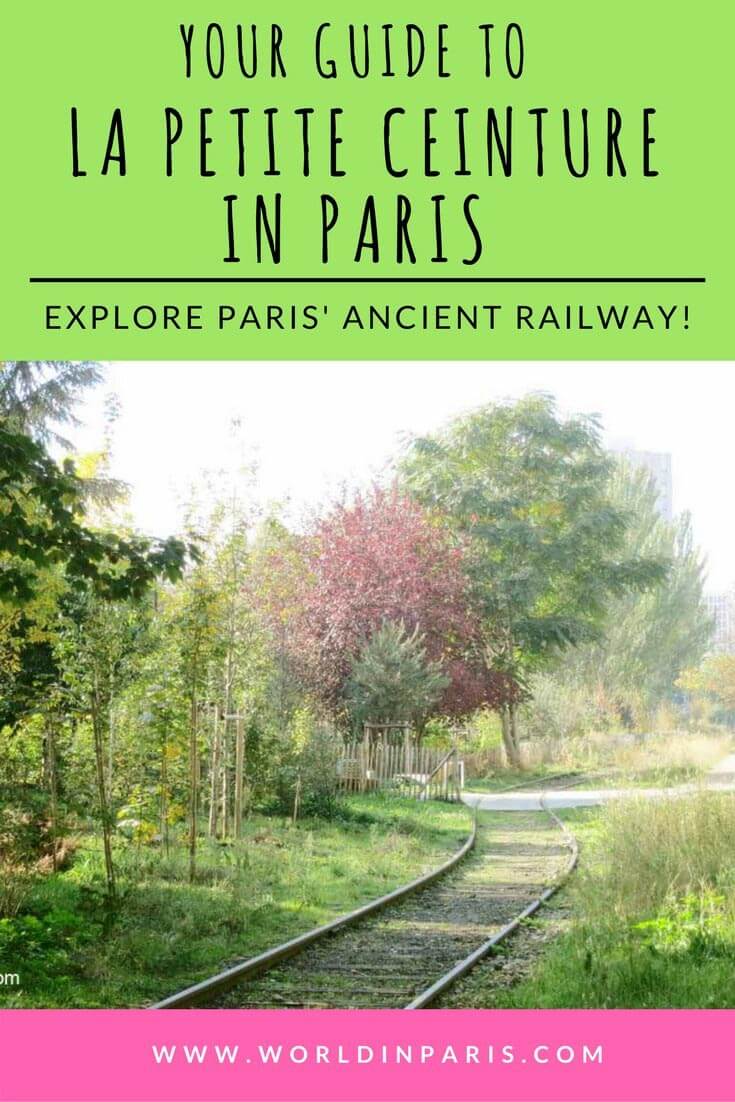 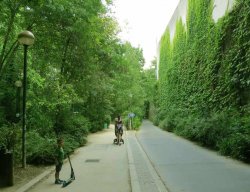 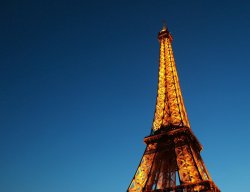