Did you know that the world’s only Vampire Museum is located in Paris?

We go on exploring the quirky side of Paris. For this piece, we meet Jacques Sirgent, writer and self-proclaimed ‘vampirologist’ who many years ago decided to open his personal collection of vampire paraphernalia to the public. That’s how Le Musée des Vampires (the Vampire Museum) was born, a lifetime work and collection which is still one of Paris’s best-kept secrets.

DID YOU KNOW? Vampirology is the study of vampires or the myths related to vampires.

A few years ago, we celebrated Halloween in Paris at the Vampire Museum as part of a night event about vampires called ‘Étrange Rencontre au Musée des Vampires’ (Strange Meetings at the Vampire Museum). This event was organized by Sous Les Pavés, a young startup that proposes alternative tours in Paris – mainly in French – related to secret Paris.

The museum – a hidden gem in Paris and the best in its genre – is nestled in a gloomy private house with a small garden in the suburb of Lilas. A haunted house, according to the owner, but we did not want to check that by ourselves.

The Vampire Museum is one of our favorite secret places in Paris. Click here for the list of the most beautiful hidden gems in Paris.

A Peek Inside the Vampire Museum, Paris

–  The Vampires Museum is currently closed for renovation works. Opening planned for 2022 – 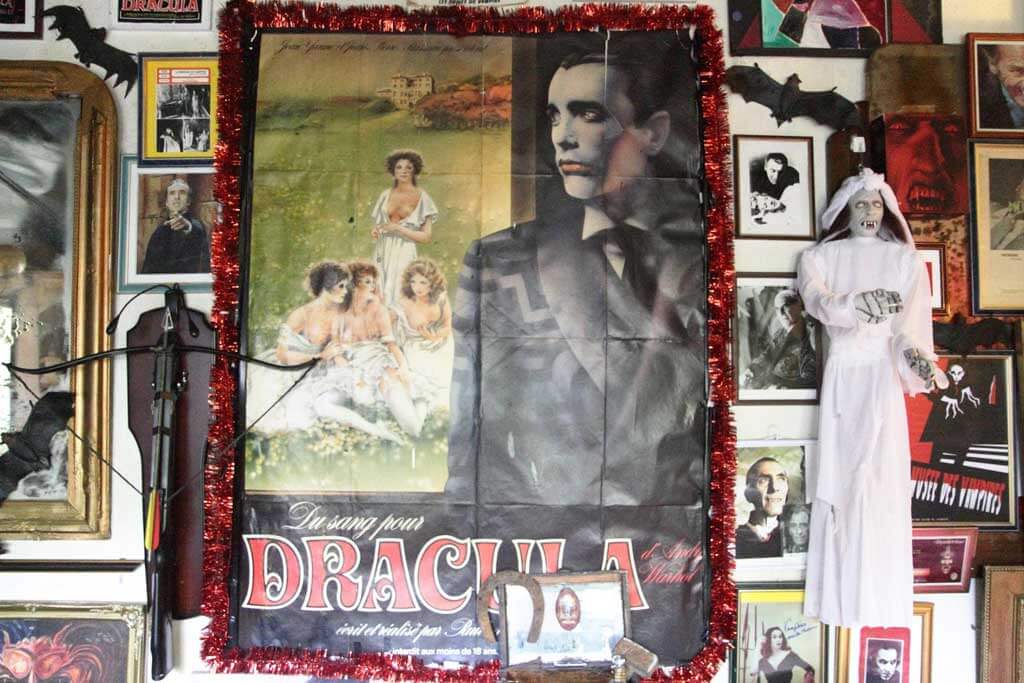 While we are waiting for the other guests to arrive, we have some time to explore the museum by ourselves. Le Musée des Vampires is very small, just one big room. It is like a “cabinet de curiosités” (cabinet of curiosities or collection of curiosities in English) packed with all sorts of stuff related to vampires and legendary creatures.

All here is second-hand objects: vampire films posters, vampire masks, and other objects bought by Jacques Sirgent himself online or in flea markets in Paris. The museum’s most interesting pieces include an anti-vampire protection kit from the 19th century, the autographed photos of almost all the actors featuring Dracula (the most famous vampires ever!), some rare vampirology books, or really antique books where the concept of “vampire” is mentioned.

Once we are all there and comfortably seated on a crimson velvet couch, our host welcomes us with a very special drink. A kind of vampire drink I would say, red and sweet, which puts us in the mood for a vampire night…

Our Night at the Museum of Vampires and Legendary Creatures

Jacques Sirgent is very passionate about his work and collection and he really knows how to transmit this passion.

If you are a vampire passionate, Sirgent can help. He suggested to us some vampirology books, written by other authors and there were also Jacques Sirgent’s books to buy.

The conference was very interesting, even if sometimes it was difficult to follow. The concept of vampires and what surrounds them was very fascinating and we all were listening attentively while sipping our vampire drinks.

Where do Vampires come from? Are they as horrible as we think? The aim of Sirgent’s talk was not to scare us but to give us a different vision of the vampires living in our imagination. Who else than vampires will never enter your home unless they are invited by you?

Indeed, Sirgent’s goal was to contrast the monsters of our imagination with those, even more monstrous, found in everyday life.

I found the event and the museum very interesting. Some years before I had done a Secret Paris Tour at Père Lachaise with Jacques Sirgent (that day we were looking for Dracula’s tomb in Paris!) and I knew that he would not disappoint.

However, this is a talk difficult to follow if you don’t have a good level of French. In this case, there is always the possibility to visit the museum out of these Halloween in Paris events, during a half creepy, half funny afternoon, and exchange some words with him in English.

If you are looking for alternative things to see in Paris, the Vampire Museum Paris won’t disappoint you.

» The event “Etrange rencontre au Musée des Vampires” is organized by Sous Les Pavés. You can check the next dates and book directly on Sous Les Pavés’ web.

» If you don’t speak French you can always visit the Vampire Museum Paris out of this event. The museum is located at 14 rue Jules David, Les Lilas (93). The closest metro station is Porte des Lilas, line 11. As it’s a private museum, you need to book your visit in advance. You can email directly Jacques Sirgent at museedesvampires [at] sfr.fr.

» Sous Les Pavés proposes other interesting alternative tours in Paris: Paris night tours, quirky Paris tours, haunted Paris tours, esoteric visits at Père Lachaise, and many more. All their guides are selected with great care and have in common a singular passion: vampirologist, master Freemason, exorcist, hypnotist… The guides are all very enthusiastic and happy to share their Paris best-kept secrets.

» For the time being, Sous Les Pavés tours are only in French. They plan to launch most of the tours in English and certain tours also in Spanish very soon. Join their social media and stay tuned!

Are you ready to discover one of Paris’s best-kept secrets?

Disclaimer: we would like to thank Sous Les Pavés and Jacques Sirgent for inviting us to the event “Étrange Rencontre au Musée des Vampires”.  As always, all opinions remain our own. Cover Picture courtesy of Sous Les Pavés.