Quirky Paris is our personal cabinet de curiosités, the result of our flâneries in Paris. We tell you about our favorite findings while wandering aimlessly around Paris and their stories behind.

Spotted in . . . Jardin des Plantes (A Fashion Icon in Paris) 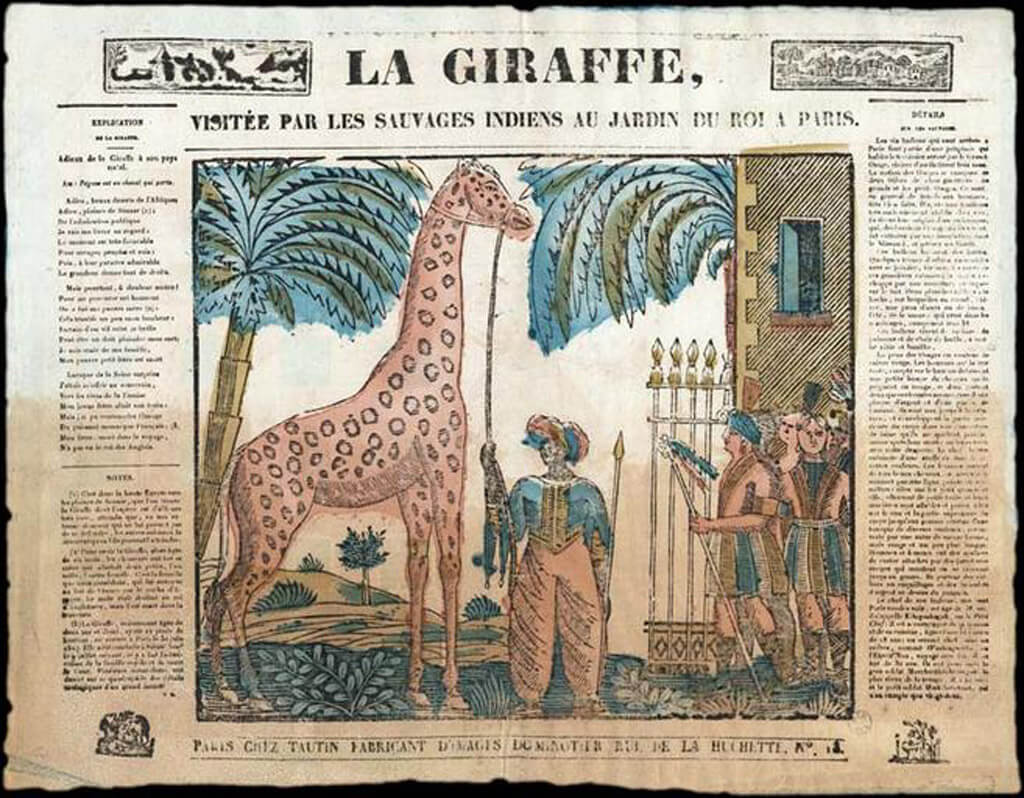 Let me introduce you Zarafa, the first giraffe in France and a fashion icon in Paris in the 1820s. Zarafa was a gift from Egypt to Charles X King of France and the precious animal traveled from Alexandria to Marseille by boat (the deck was altered so she could stick her head out through a hole), where she arrived in October 1826

Zarafa was carefully transported to Paris by what seemed the least dangerous way: on foot! Zarafa was accompanied by her two Sudanese caretakers and a few milk cows. To see a giraffe first-hand for the first time was extraordinary, and along her way to Paris thousands of people turned out to see her approach.

Finally, Zarafa arrived in Paris in 1827, where she was welcomed by King Charles, and she found a home at the Jardin des Plantes (known at that time as Jardin du Roi) in Paris 5. During her first months in Paris, some 600,000 visitors stopped by to see the giraffe, that strange animal with a long neck and seductive eyes that moved with surprising elegance.

Zarafa became a sensation in the capital to the point that Zarafa made her mark on fashion in Paris. Everything was “la mode à la giraffe”: giraffe-themed fabrics and hairstyles (inspired by the animal’s horns) for ladies, giraffe-themed wallpapers for home,  and many porcelain, accessories, combs, soap, and fans for visitors….. Zarafa was a real trendsetter! Some people called her “la Belle Africaine” (“the Beautiful African”), while others simply called her “la girafe,” because there were no others.

The giraffemania fashion faded by 1830, together with the reign of King Charles X. Zarafa, however, lived peacefully until 1845, after which she was taxidermied. She’s still on view at the Muséum d’Histoire Naturelle de La Rochelle. 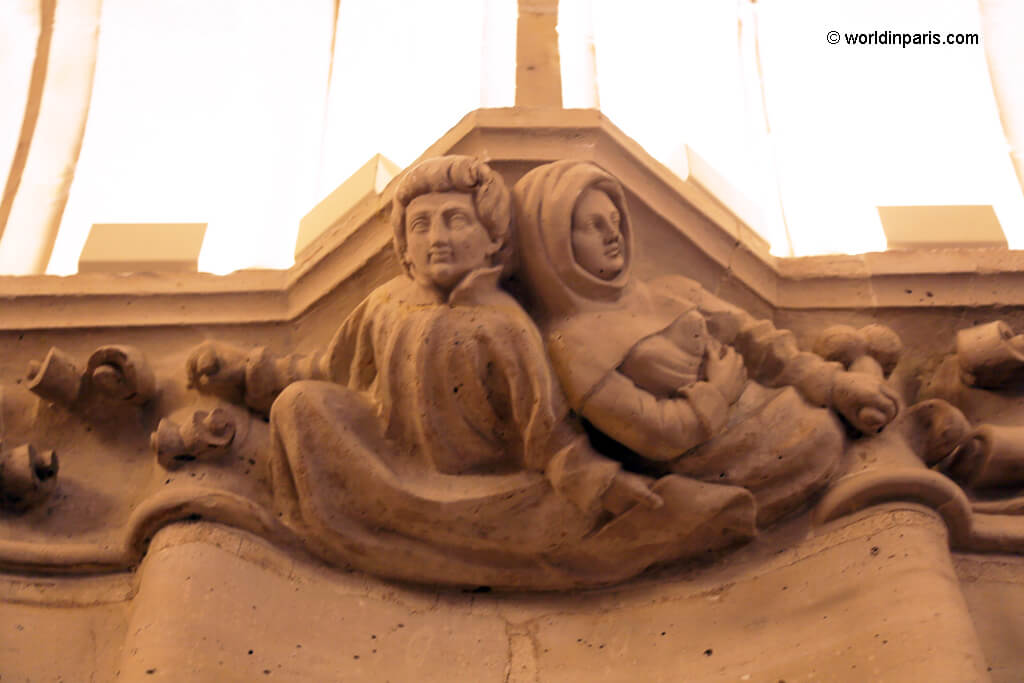 At the Conciergerie, in Paris 1, there is a beautiful bas-relief representing Abélard and Héloïse.

Héloïse holds in her left hand the sex of her lover. Next to them, out of frame, you can see a beaver, symbol of Abélard’s emasculation. We imagined that a beaver, chased by hunters, renounced to its attributes by castrating itself with its teeth and it thus saved the essential, its life. This is reminiscent of the sad punishment that was reserved for Abélard.

Héloïse and Abelard are two famous lovers from the Middle Ages. Their story is a myth of impossible love.

In 1817 the Empress Joséphine, moved by their story, ordered that their bodies were transposed to the Père-Lachaise cemetery in Paris. Each year, their graves are flowered with thousands of flowers brought by couples of lovers in memory of this union which knew how to play with the elements.

Spotted in . . . The Marais (France’s Most Precious Treasures) 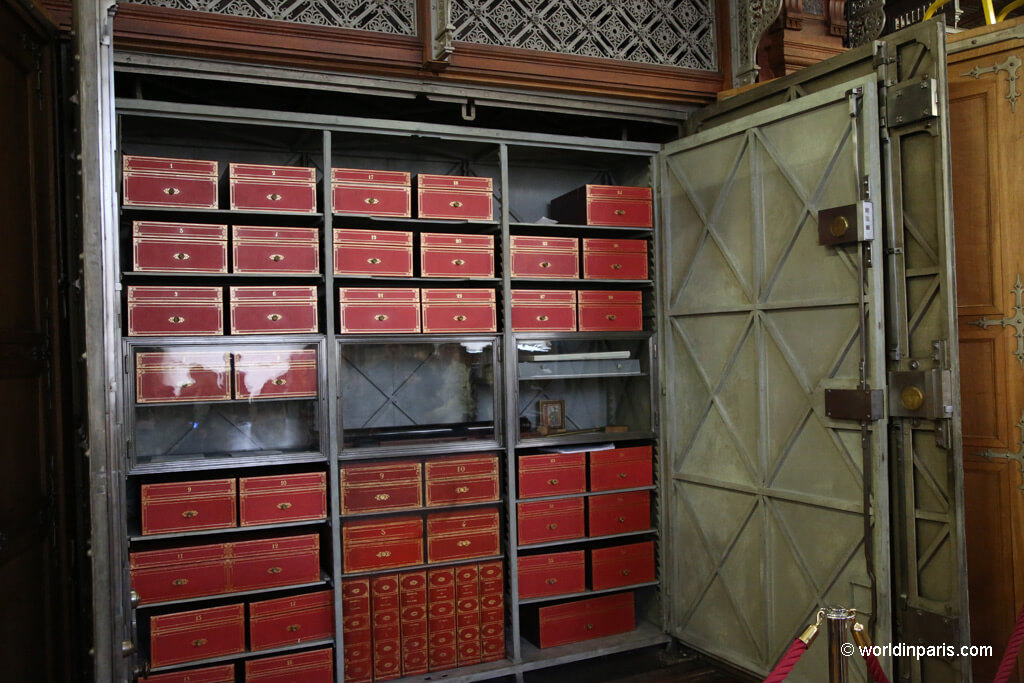 L’Armoire de Fer (the Iron Cabinet) is a strongbox kept in the heart of the “Great Deposits” of the French National Archives, in Paris 3. It houses certain documents particularly precious for French National History.

It was built in 1791 at the request of the National Assembly, to house the essential documents produced by the new regime. Indestructible and inviolable, it is made up of two enormous metal boxes fitted together.

To open the Iron Cabinet three keys are necessary, kept by three different people: the President of the Assembly, his secretary and his archivist who needed to be in the same room and at the same time for the opening.

The Iron Cabinet contains many precious objects: all the constitutions of France; the meter standard and the kilogram standard; the will and testaments of King Louis XIV, and Napoleon I; Louis XVI’s hunting journal (note that on 14 July 1789 he just wrote “rien” (nothing)); the Tennis Court Oath (1789) and Marie-Antoinette’s last letter. There is also a little picture of Saint Jeanne d’Arc

This tabernacle of national history is only opened on rare occasions (and World in Paris was there, he hee 😎 ) 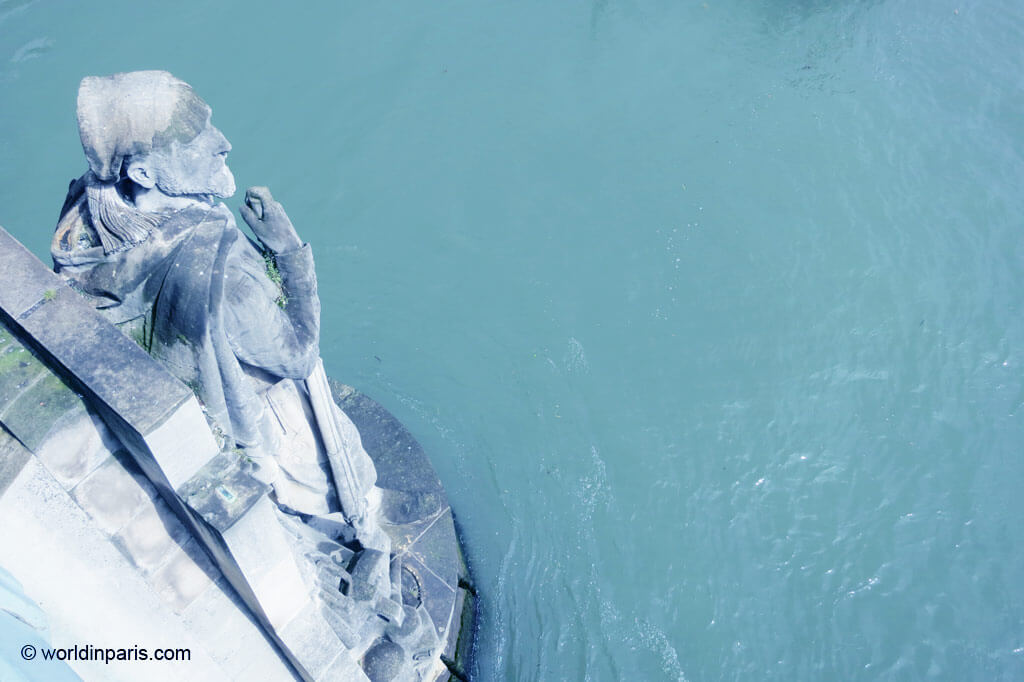 💦 The Alma Bridge (1854-56), inaugurated by Napoleon III to commemorate the victory against Russians in Crimea (1854), has 4 sculptures representing the four kinds of soldiers who participated in this war. The Zouave (French soldier from the North Africa armies) is the only original statue still standing on its place (the others were moved to museums) and it is Parisians’popular way to measure the Seine’s floods. It is not an official measurement system, (it is the hydrometric scale of the Pont d’Austerlitz that sets the standard for scientists) it is popular culture.

In Paris, when it rains a lot and during a long period, Parisians start looking at the Zouave. The access to the footpaths along the river quays is usually closed when the Seine’s level reaches the feet of the Zouave. When the water hits his thighs, the river is not navigable. During the great flood of the Seine (1910) the level reached his shoulders (+8.62m). You can learn other curious things about water in Paris at the Paris Sewer Museum which will re-open its doors very soon. 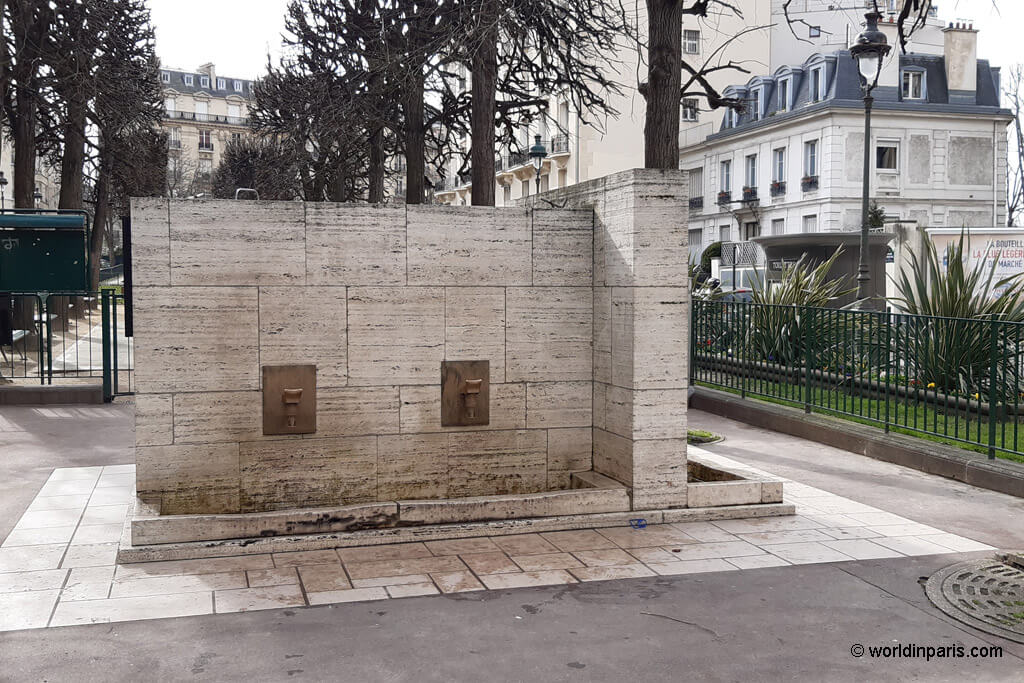 This is not an ordinary fountain in Paris, this is an ARTESIAN WELL! 💦

🧐 In order to provide its residents with uncontaminated drinking water, the City of Paris drills in 1832 5 artesian wells. This becomes a difficult job: probing the ground, crossing the layers of the Eocene and the Upper Cretaceous to the impervious clays of the Gault which retain the water trapped in the sandy layer of the Albian.

This aquifer, a fossil groundwater covering the entire Ile de France region and over 25,000 years old, is located between 550 and 750 meters deep and therefore preserved from bacterial or chemical pollution. These artesian wells provide spring water of rare purity: slightly ferruginous and naturally rich in fluorine, it remains little mineralized: it is like if we were drinking water from the Prehistory! 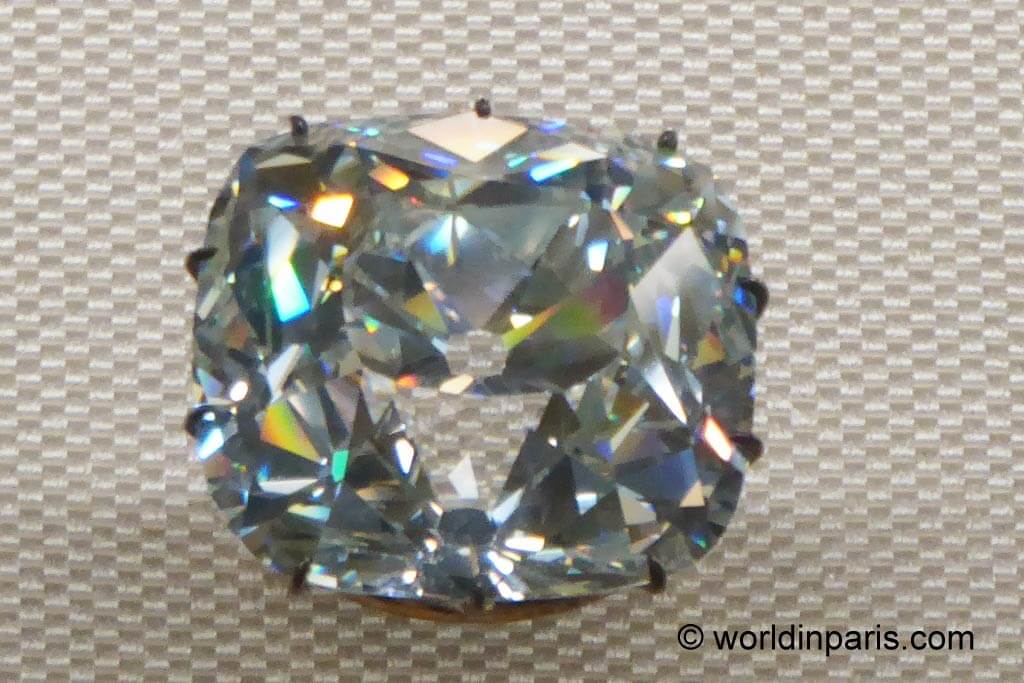 Do you know this guy? 💍🧐 This 140-carat diamond is called Le Régent and its flawless brilliance and perfect cut make of it the finest diamond in the world.

Le Régent is one of our favorite “artworks” to see in the Louvre Museum plus it is displayed in a stunning place: the Galérie d’Apollon (Denon Wing, 1st floor, room #705). 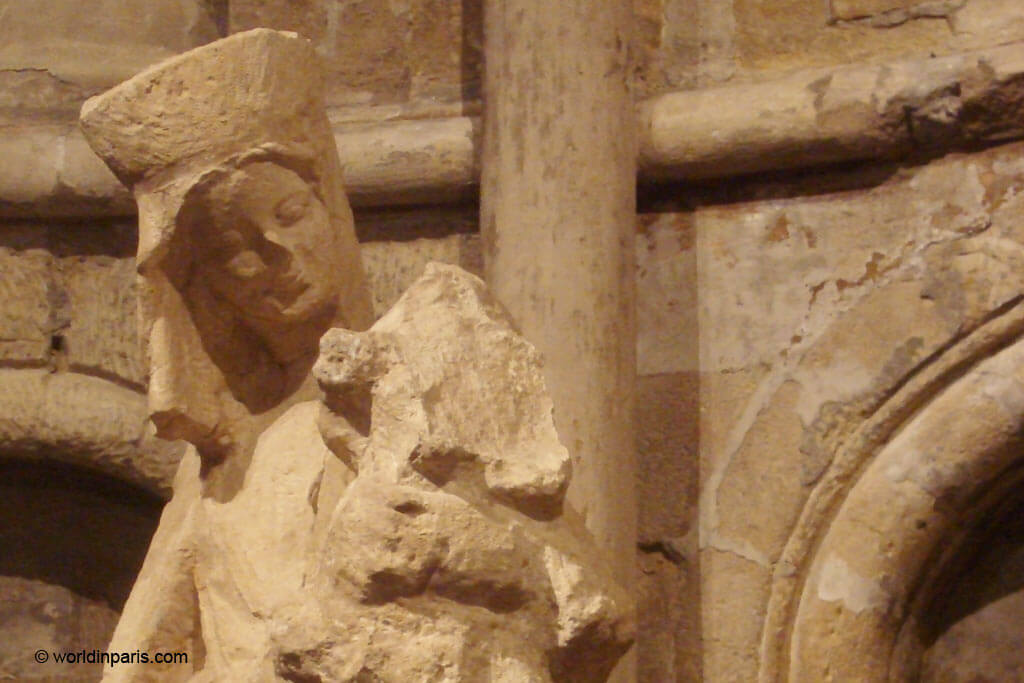 Let me introduce you La Vierge du Sourire (Virgin of the Smile), you can find her at the Church of Saint-Germain-des-Prés.

I met her by chance, during one of my explorations of the neighborhood, and her sweet smile bewitched me.

I remember taking dozens of pictures, trying to catch the scene from different angles: her almond eyes, her head tilted towards Christ, the tenderness between the two actors . . . her beautiful smile. Before leaving, I promised to visit her again soon.

La Vierge du Sourire was discovered in 1999 during some excavation works near Rue de Furstenberg. Consisting of three stone fragments the sculpture of the Virgin and Child remained unfinished – probably following a major accident – and abandoned by the artist. Because “nobody can break an image of the Lord”, the stone was not reused and the Virgin and the Child were buried near the abbey… until the 20th century.

The first time I met the Virgin, she was staying in one of the apse chapels. I kept my promise to visit her again but she had disappeared. What happened to La Vierge du Sourire? Perhaps she was under restoration or relocated to a museum. Or perhaps I did not look well enough.

I found her back last December, this time standing next to the main altar: what a beautiful surprise!

If you are walking around Saint-Germain, go to the church of Saint Germain-des-Prés to say HI! to the Virgin of the Smile. This Mona Lisa of the Middle Ages, contemporary of the Angel with the smile of Reims, is a moving example of the Parisian sculpture of the 13th century. 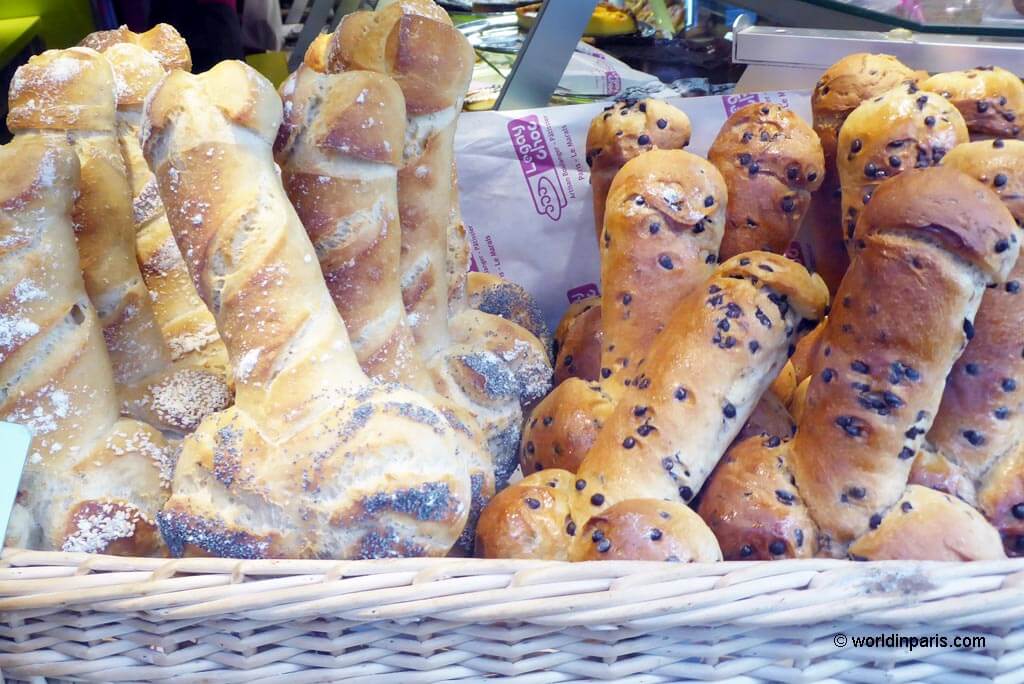 These baguettes are called Baguettes Magiques and they cost from 2.20 € to 4.5 € depending on the size. So YES, size matters!

Le Marais, and more specifically some streets in Paris 4, is particularly popular with the LGBT community. Most of the French capital’s gay-friendly venues are located in this neighborhood and you will see rainbow flags everywhere. 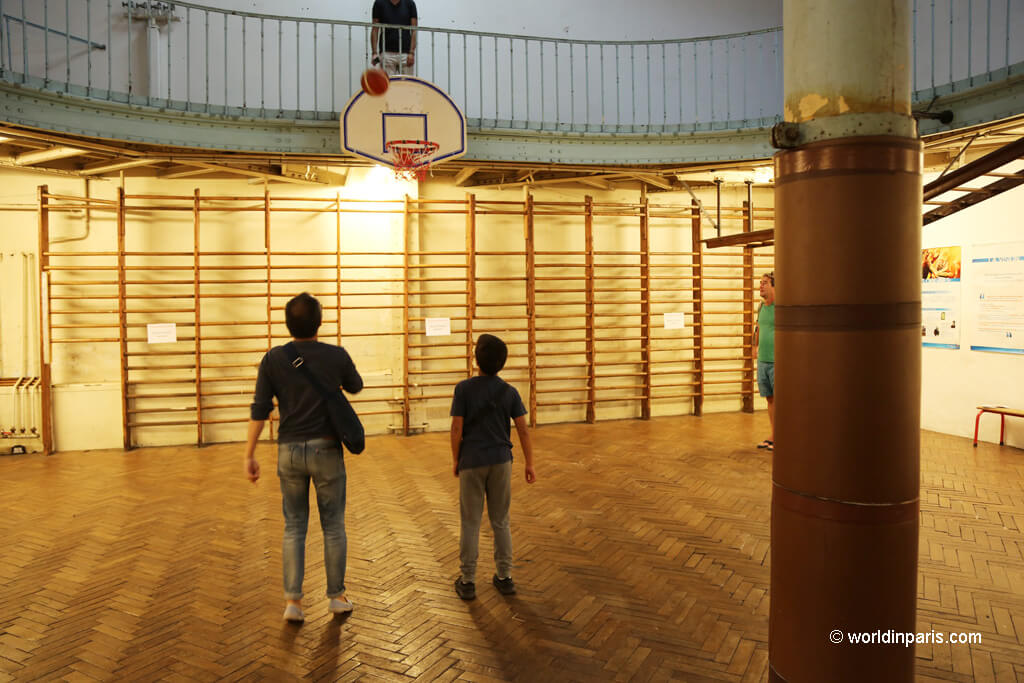 🏀 Did you know that the world’s oldest basketball court is located in Paris 9? Part of the Y.M.C.A’s Gymnasium of Paris ✌️ this basketball court was built in the year 1893. This is less than two years after James Naismith invented the game at a Y.M.C.A. in Springfield, Mass.

This gymnasium located in the 9th Arrondissement of Paris feels like a walk-in time capsule or museum exhibit. The Y.M.C.A. in Paris was the game’s very first landing spot in Europe, a kind of slice of American life transplanted to France.

Head to this article for the list of American sights in Paris. 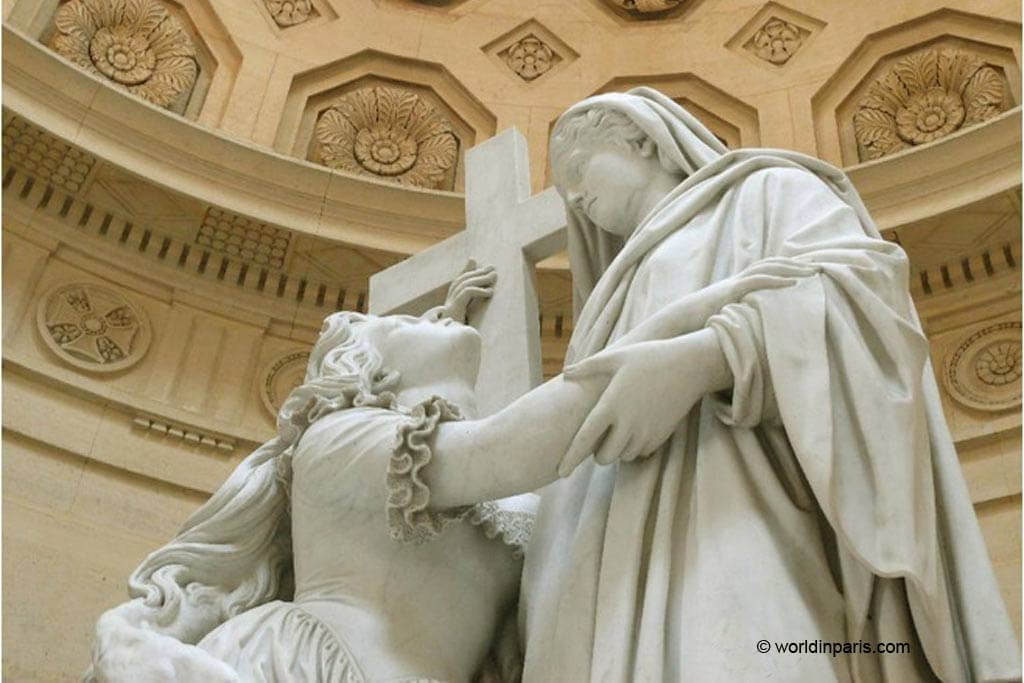 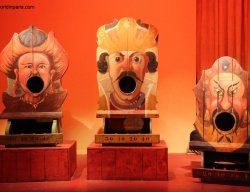 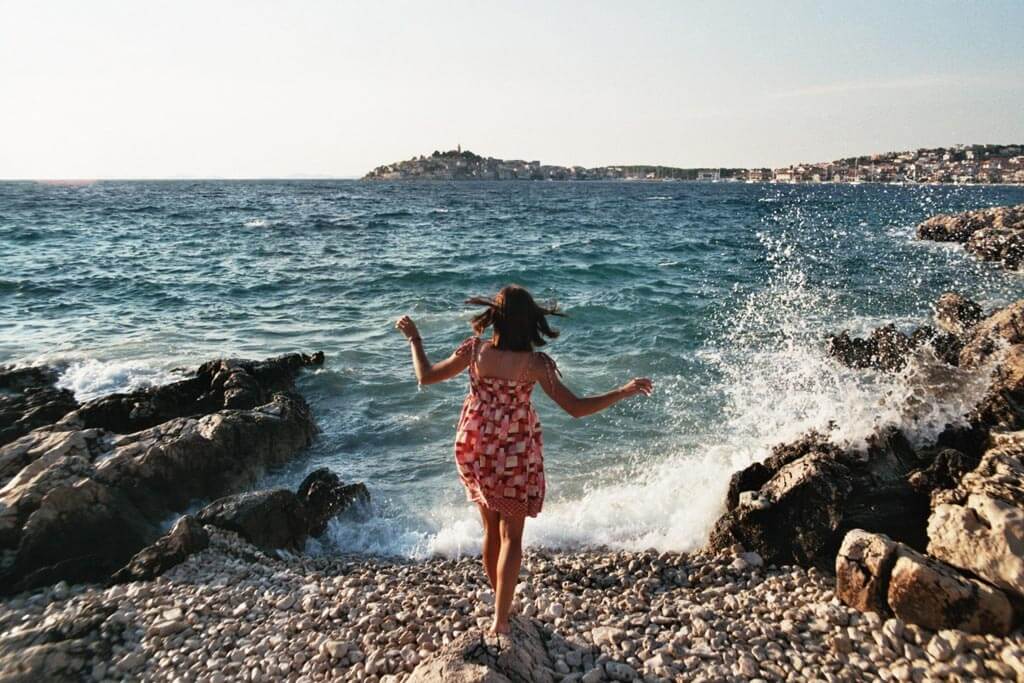 These are the Best Small Towns near Paris that you cannot miss!

How to Plan a Trip to Paris: Paris Travel Planner