6th Arrondissement of Paris: Where to Eat, Play & Stay in St-Germain-des-Prés, and Luxembourg

Introducing the 6th Arrondissement of Paris

From the river Seine in the north to Boulevard de Montparnasse in the south, the 6th Arrondissement of Paris is the chic district of the historic neighborhoods of Luxembourg and Saint-Germain-des-Prés.

The sixth Arrondissement of Paris is well known for its revolutionary intellectualism, elegant houses, cute cafes, and antique shops. This is one of the most emblematic districts of Paris and one of the tourists’ favorite places for a stroll, a coffee, or dining out.

The 6th Arrondissement is divided into 4 neighborhoods: Monnaie, Odéon, Notre-Dame-des-Champs, and Saint-Germain-des-Près.

St-Germain-des-Prés: from Village Outside Paris to Intellectuals’ Favorite Haunt

Originally, St-Germain-des-Prés was a village located beyond the outskirts of early medieval Paris. The whole area belonged to the independent Benedictine Abbey of Saint-Germain, which had its own houses and also stables, chapels, cloisters, and prison. Later, other religious congregations (Cordeliers, Carmelites . .) also founded an establishment in Saint-Germain-des-Près.

With the increasing number of university students in Paris, the Latin Quarter extended to the St-Germain neighborhood, and many universities and cultural centers like the National School of Fine Arts and Collège des 5 Nations established in the area. Following these educational institutions, many bookshops and publishing houses also opened in St-Germain-des-Prés, contributing to the district’s intellectual (and later revolutionary) atmosphere.

During the French Revolution, the Abbey of Saint Germain was closed down by the revolutionary Assembly and used for gunpowder storage. Unfortunately, an explosion in 1794 destroyed most of the abbey’s buildings, and only the monastic church and the abbatial palace survived.

A New Golden Age for Saint-Germain-des-Prés

After the Second World War in Paris, St-Germain-des-Prés became a center of intellectual and cultural life in Paris, with the presence of promising writers and artists like Marguerite Duras, Jean-Paul Sartre, Simone de Beauvoir, François Truffaut, Picasso, Giacometti, Ernest Hemingway, and many more. All these cool people liked to wander around the Saint-Germain neighborhood and enjoy its particular atmosphere and a good intellectual discussion at Café Les Deux Magots or Café de Flore.

At night, philosophers, authors, and artists mixed in breweries and smoky nightclubs, where existentialist philosophy coexisted with American jazz. The 6th Arrondissement of Paris was the home of much of the major post-war intellectual and literary movements such as existentialism, surrealism, and modern feminism.

From the beginning of the 70s, the reputation of St-Germain neighborhood attracted international tourism, who gradually transformed the district with their money. Luxury boutiques and art galleries established in Saint-Germain-des-Prés and the price of real estate increased considerably, with prohibited prices for locals.

Consequently, many bookstores, printers, and small shops had to close and the headquarters of major publishing houses and universities had to move to other parts of Paris. Today the intellectual prestige of the 6th District of Paris has vanished and Saint-Germain has lost its soul forever. However, the beautiful 17th-century architecture and a couple of iconic sites still remain and Saint-Germain is still a beautiful place for a stroll or a night out.

The District of the Luxembourg Gardens

In the 17th century, the areas around the Church of Saint-Sulpice and the church of Saint-André des Arts were urbanized. Queen Marie de Médicis bought an estate in this area to build the Luxembourg Palace (today the seat of the French Senate) surrounded by magnificent gardens. The new Palais de Luxembourg turned the neighborhood into a fashionable district for French nobility, who moved to the 6th Arrondissement and built beautiful private mansions.

Without any further ado, let’s check the most interesting things to see and do in the beautiful 6th Arrondissement of Paris.

Top Things to Do in the 6th Arrondissement

2- Musée National Eugène Delacroix – The museum occupies part of the painter’s last apartment where he died. Learn about his life and work and visit his workshop which opens onto a beautiful private garden.

3- Relax at the Luxembourg Gardens – this is a pleasant and elegant garden adjacent to the Luxembourg Palace. It has a beautiful pond, many sculptures, and it is a great place for reading a book or a picnic in the grass.

4- Church of Saint Sulpice – Built in the 17th century, with foundations from the 12th century, the Church of Saint Sulpice is one of the sites in Paris where the ‘Da Vinci Code’ by Dan Brown was filmed.  Located in a beautiful square in the heart of Saint-Germain neighborhood, the church – one of the biggest in Paris – has a beautiful façade with its two recognizable towers and beautiful mural paintings by Delacroix inside.

Unique Things to Do in the 6th District of Paris

In our Paris Arrondissement Guides, we like to encourage people to beat the crowds and explore Paris beyond its main sights. Despite being one of the most touristy districts of Paris, there are many unique things to see and do in the sixth Arrondissement, beyond the classic stroll around the Luxembourg Gardens or St-Germain-des-Près.

Below, the list of unique things to do in the 6th Arrondissement of Paris we believe you shouldn’t miss:

5- Musée Zadkine – Tucked away in the greenery of a sculpture-filled garden near the Luxembourg Gardens, the Musée Zadkine was the home and workshop of Ossip Zadkine (1890-1967) a Russian sculptor and a major figure at the Ecole de Paris. It offers a beautiful collection of his work and a glimpse of an artist’s everyday life in the Paris of the first half of the 20th century.

7- Rue de Furstenberg – this is a nice street /square with a small-town feeling. The Musée Eugène Delacroix is located on this street.

8- Bibliothèque Mazarine – This is the oldest public library in France and a wonder for book lovers. It is part of the Institut de France, the former Collège des Quatre-Nations built by Cardinal Mazarin in the 17th century.

9- The marble Meter Standard – placed in 1796, it helped Parisians to get used to the new metric system. Only two original standards survive and this one is at 36, rue Vaugirard in Paris 6.

10- The Meridian Lines – In the 6th District of Paris there are two meridian lines located at 11 Quai de Conti (vertical) and inside the Church of Saint Sulpice.

11- La Vierge du Sourire – rare to find, the ‘Vierges Parisiennes’ are easily recognizable by their characteristic smile. There is a beautiful (unfinished) example at the Church of Saint-Germain-des-Prés.

In the 6th Arrondissement of Paris, there is a good choice of restaurants of all kinds and budgets proposing good French cuisine.

» Le Colvert Bistrot – 54 rue Saint-André des Arts, 75006 Paris. This charming restaurant with a bistro atmosphere has a good location at rue St-André-des-Arts, close to St-Michel and Odéon. The service is top, and their menu is always good and varied, with original and well-presented bistro dishes.

» Javette –  20 rue Dauphine, 75006 Paris. This new restaurant in Saint-Germain is good and beautiful! We love the decoration and general atmosphere of this restaurant which proposes classic dishes of French cuisine prepared with fresh and quality produce.

» Crêperie L’Atelier Artisan Crêpier – Mabillon –  10 rue Mabillon, 75006 Paris. This is one of our favorite crêperies in Paris, the kind of place we like to go from time to time. The decoration is contemporary and the service is always top. They propose good and copious dishes of crêpes and galettes washed down with good cider. For dessert, don’t miss the crêpe Joséphine, my favorite!

Hotels in the 6th Arrondissement Paris

The 6th Arrondissement of Paris is one of the favorite districts to stay in, with a good choice of beautiful boutique hotels and a few luxury hotels.

Generally speaking, the hotels in the 6th District of Paris tend to be more expensive than in other areas of the city and it’s hard to find quality budget hotels (-100€ /night) in the sixth Arrondissement.

Booking.com is the best site for booking hotels in Paris. They have good rates and a huge selection of hotels of all kinds plus it is possible to cancel for free if, in the end, you cannot make it to Paris.

The Hotel Lutetia is one of the most beautiful historic hotels in Paris and also the most famous hotel in the Left Bank, visited by several local and international celebrities.

Hotel Lutetia was Paris’ first Art Deco hotel and today many of these original features can still be seen such as the grand revolving door. The Art Deco style is continued in the 184 guest rooms and each one contains a flat-screen, Wi-Fi, minibar, and marble bathrooms with deep marble tubs.

This hotel set in a 16th-century private mansion is one of the top choices in the heart of the Saint-Germain neighborhood. All the rooms are unique, and they are designed and furnished in different styles. The hotel also boasts classy common spaces, a garden, a spa, and a fitness center.

Hotel Chaplain Paris Rive Gauche is one of the best mid-range hotels in Paris 6. Chic and modern it is located only a few meters from the Luxembourg Gardens. The hotel rooms are fancy and colorful and it has a chic dining area and a floral courtyard, where you can take your breakfast or a drink.

The Meridian Lines: in the courtyard of Palais de la Monnaie at 11 Quai de Conti (vertical), and inside the Church of Saint Sulpice, 75008 Paris

La Vierge du Sourire: inside the Church of Saint-Germain-des-Prés, 75006 Paris

Want to Explore Beyond Paris 6? 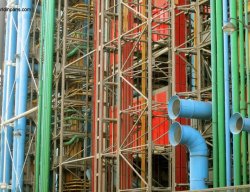 Paris 4 Like a Local: where to eat, play & stay in Ile de la Cité and le Marais 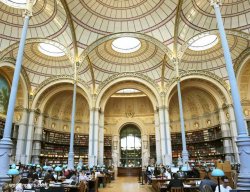 Paris 2 Like a Local: where to eat, play & stay in Quartier Montorgueil and Quartier du Sentier