What to Eat in Paris – Famous Foods You Need to Try

Wondering what to eat in Paris? French cuisine is world-famous, with many tasty culinary delights based on traditional recipes and quality produce. There are countless delicious dishes to be found in Paris. Some can be found all over the country whilst others are traditional food in Paris only.

Below, the list of 14 Paris famous foods, popular food in Paris worth trying when you travel to Paris. From the city’s favorite street foods to traditional food in Paris or yummy desserts, here’s how to eat like a local in Paris.

TIP: food tours are a great idea to learn about Paris famous foods while exploring the city. Check out our favorite food tours in Paris.

In Paris, there’s no better way to start your day than with a café & croissant. Inherited from the Austrian bakeries that opened in Paris in the 1830s, the croissant is a Viennese pastry appreciated for its delicious buttery taste.

The croissant is a must-eat in Paris and perhaps the most famous food in Paris. It is the perfect French staple for breakfast, and a perfect buttery snack at any time of the day.

Most of the hotels in Paris propose in their breakfast menu the combination café & croissant but we recommend trying it also in a Parisian café or grab a croissant directly from your favorite bakery when it is still warm.

Another popular food in Paris is the croque-monsieur. This Paris famous food is a classic of the brasseries but you can find it also in some Parisian cafés and it is always eaten on-site, with fork and knife.

The croque-monsieur consists of two slices of bread, filled with boiled ham and béchamel, and covered with a generous layer of melted cheese. It is a staple served warm and it is perfect for a break during your Parisian explorations. If you’re extra hungry, get the croque-madame, which adds a fried egg on top.

Jambon-beurre is another typical food in Paris, the most Parisian of sandwiches. If you want to eat something really Parisian, then go for a jambon-beurre!

The jambon-beurre comes as a fresh half baguette, its insides smeared with butter and filled with jambon de Paris (cooked ham) with optional cornichons.

Jambon-beurre is one of the best cheap eats in Paris, perfect for eating something on the go while exploring Paris. You can buy a jambon-beurre in many corner bakeries or order it from the counter at most Parisian cafés.

A Plate of Oysters

Despite being far from the sea, oysters (huîtres) is a popular food in Paris. Parisians love to eat oysters, especially if they are washed down with a glass of good white wine!

There’s a specific way to eat oysters and also a specific time. You open the oyster, put some drops of lemon on it, and eat it right from its shell. Also, oysters are in season during any month that has an R in it (September-April), but you start having the best oysters from October.

You can find the best oysters in Paris in Huîtrerie Régis, in Paris 6, and they’re available for take out or to eat on the spot in their little dining room. But there are so many places where you can eat good oysters that we could write a full article on oysters!

Soupe à l’oignon is another famous food in Paris. This traditional food in Paris – simple but hearty – used to be served by eateries in the old market halls to reinvigorate the handlers and night revelers.

The onion soup consists of a rich flavored soup of broth (made of stock meat) and caramelized onions, topped with a layer of melted grated cheese mixed with crunchy croutons. Usually is served with some slices or half Parisian baguette.

Onion soup can be found in all good brasseries and it is perfect for the winter months to feel warm and full.

More about Food in Paris

Escargots (snails) are another interesting food to eat in Paris. Some people may be surprised that we French eat snails but actually, human beings have been eating snails since prehistoric times.

Another common idea outside France is that escargots are a fancy meal only found in expensive restaurants. In Paris, however, you can find escargots also in many simple restaurants or typical bistros.

So how do snails taste? Escargots are fluffy and they tend to taste like whatever they are cooked in, which is usually butter, garlic, and parsley. Doesn’t sound much sophisticated, right?

The best place to taste this Paris famous food is L’Escargot, at 38 rue Montorgueil (Paris 2). This restaurant with a huge golden snail on its roof was founded in 1832 and has been serving snails since then in an elegant atmosphere.

Another popular food in Paris is moules-frites. Moules-frites is a typical food in Belgium but we Parisians do not have any problem in adopting things when they are so good!

Moules-frites consists of cooked mussels (usually a kilogram per person) and French fries served in separate places. You can eat French fries with your fingers. For mussels, we usually eat the first one like we can (i.e. with a fork), and then we use the empty shell as a wrench to eat the rest of the mussels.

You can eat moules-frites in many restaurants in Paris. There is a Belgian chain called Léon specializing in moules-frites, with restaurants everywhere in the city. We like to go to La Petite Hostellerie, at rue de la Harpe in Paris 5. They propose a set menu moules-frites + a glass of beer (or wine) for 10 euros.

No surprises about this Paris famous food: when you order steak-frites you will get a rib steak and French fries. The waiter just needs to know “la cuisson“, how cooked you like your meat: very rare, rare, medium-rare, and well-cooked. Sometimes you can also choose the sauce, be it Béarnaise or peppercorn.

This traditional food in Paris dates back to the 19th century when there was a slaughterhouse at La Villette (Paris 19). The butchers there were fond of eating rib steak with butter and herbs, traditionally served with Pont Neuf potatoes – the ancestors of French fries.

Steak-frites is a must-eat in Paris, still a staple dish in Parisian bistros, so you just need to find your favorite bistro in Paris.

GOOD TO KNOW: you will notice that the French tend to eat the meat cooked very rare or rare. This is because the less we cook the meat, the more we can feel the meat’s taste.

Duck confit originally comes from Gascogne, a region in the south of France. The confit method consists of cooking duck thighs in their own fat until the skin turns golden and crisp and the meat is spectacularly moist and fork-tender.

You can find duck confit in a few Parisian bistros and restaurants, depending on the cook’s mood.

Adventurous people looking for local experiences in Paris should try the steak tartare. A steak tartare is raw minced or finely chopped beef served with onions and capers. Yes, we said RAW meat, and yes, the French LOVE it!

You can find steak tartare in most of brasseries and Parisian bistros. However, when you’re eating raw meat, you want to make sure that you have quality meat and it’s prepared correctly so don’t order a tartare anywhere.

We recommend the addresses Au Petit Fer à Cheval, and Les Philosophes, both in Paris 4 or Les Fines Gueules in Paris 1: all three are reputed to prepare the best steak tartares in Paris.

Another popular food in Paris that you need to try is the Coq au Vin, which is rooster braised with red wine, usually from the Burgundy wine region.

Coq au Vin is originally from the regions of Auvergne – Bourgogne but it is very common to find it also in Paris.

Coq au vin is often served with vegetables, garlic, and, of course, a glass of red wine. The best place to try coq au vin is at La Jacobine in Paris the Latin Quarter but in general, it’s a classic of the Parisian bistro menu.

Cheese in France is not a dessert: cheese is cheese and it is usually eaten after your meal and before the dessert.

A must-eat in Paris, you can also eat cheese during the aperó time in a wine bar, often together with a plate of cold cuts and bread, to pair it with your favorite wine.

In France, there are so many cheeses that you could eat a different French cheese every day of the year!

You can find cheese everywhere in Paris, in all restaurants, bistros, brasseries and also in many wine bars. We recommend visiting a couple of traditional fromageries (cheese shops): they are smelly places but also a feast for the eyes.

A must-eat in Paris, easy to prepare, and vegetarian-friendly, crêpes are one of the few native street foods in Paris and France. You can eat cold or hot crêpes, sweet or salty (called galettes), as the main dish, dessert, or just for an afternoon snack.

Crêpes come with lots of different fillings, being Nutella or fruit jams the most popular ones.

Macarons are another Paris famous food, very popular amongst tourists in Paris. Macarons are colorful and sweet bites, perfect with a coffee or a cup of tea. Sometimes the café-gourmand comes with one macaron too.

Macarons are composed of two crisp shells made of ground almonds and filled with a sweet paste of classic and exotic flavors such as pistachio, chocolate, or coconut.

Originally from Italy, it was Queen Marie de Medicis who brought the macarons from her homeland back in the Renaissance. Today, tourists and Instagrammers have made macarons a must-eat in Paris and iconic houses like Ladurée or Pierre Hermé see long lines to buy their macarons.

Honestly, if you are looking for macarons it is worth seeking them out from reputable pastry shops that actually make their own and come without lines and 3 times the price!

So there you have it, our selection of Paris famous food. Which famous food in Paris would you like to order right now? 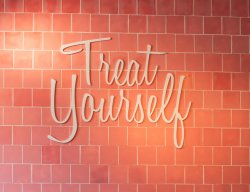 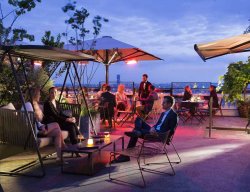 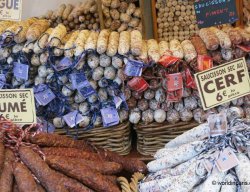