Normandy, France, is a pilgrimage site for Americans visiting Paris and all travelers in general interested in WW2. It is incredible to think that an important chapter in the history of Canada, the United States, and the United Kingdom, the chapter that shaped Western Europe as we know it today, actually happened in France. We are talking about the D-Day Landing on the beaches of Normandy, one of the most momentous events in modern history that led to the liberation of Western Europe from the Germans.

Today travelers planning a trip to Paris with a spare day in their Paris itineraries can also visit some of the historical WW2 sites related to the D-Day on a day trip Paris to Normandy. It is a long day, physically and sometimes emotionally exhausting, but ut this is an essential part of our story and it is important to keep it alive in our memories.

We wanted to visit the D-Day Beaches in Normandy and other sites since a long time but in the end, we decided to wait until 2019, year which marks the 75th anniversary of the invasion, for traveling to the Normandy Landing Beaches. We booked our tour with PARISCityVISION, a tour company specialized in Paris and its surroundings. They propose well-rated multi-day and day tours to Normandy which cover the main sites related to the Normandy D-Day Landing Beaches. We chose their guided day tour Paris to Normandy with lunch included visiting the Memorial of Caen and the main D-Day Landing Beaches.

The Normandy landing operations was the largest seaborne invasion in history. The invasion took place on the beaches of Normandy, France, on Tuesday 6 June 1944 by the Allies. The operation (codenamed Operation Neptune and also known as D-Day) meant the beginning of the liberation of German-occupied France (and later Europe) from Nazi control and laid the foundations of the Allied victory on the Western Front.

The D-Day of 6 June 1944 was just the beginning of a large operation and it took the Allies some time to reach their objectives. The 5 beaches were not all connected until 12 June and the city of Caen, for example, was not captured until 12 July. Casualties were very high, especially on the Allies side, and there were also many civil casualties. This was the price to pay in Normandy for our freedom.

Museums, memorials, and war cemeteries in Normandy France propose visitors a glimpse of this terrible chapter in our history. There’s a big job of documentation and memory behind so we all can remember.

The bus left at 7 am sharp from the 1st Arrondissement of Paris. We were happy to see many young people in the group, it seems that the youngest generations are also interested in the WW2 sites and their history. For most of us, a 7 am departure may sound hard but it’s a long way to Normandy, there’s a lot to see and do and it’s the only way to skip the traffic in Paris. In addition, we were rewarded with some of the main Paris tourist attractions under beautiful early morning light. The tour program of this day trip Paris to Normandy was very complete and included the Caen Memorial Museum, Pointe du Hoc, Arromanches, Omaha Beach, Juno Beach, and the American Cemetery and Memorial. Go on reading . . . 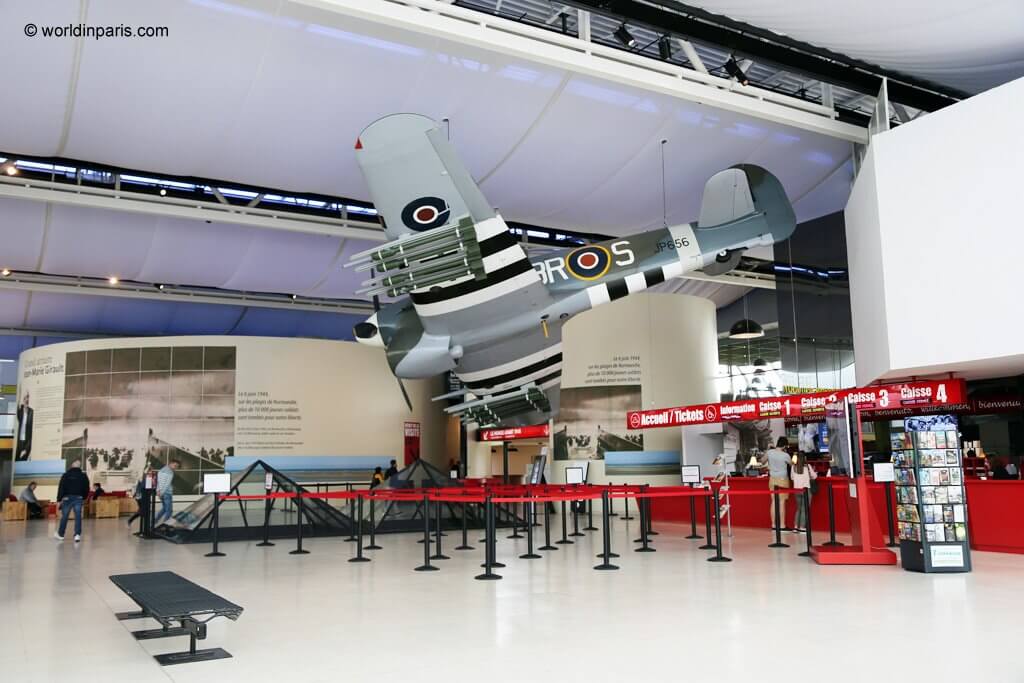 This “Museum for Peace” displays a huge collection of objects and documents related to the Second World War, mainly in France and Europe. The museum was built above General Richter’s impressive command bunker, which was restored and displays today the daily life of German soldiers under the occupation. The museum proposes different exhibition rooms, a short documentary about the D-Day landings shown every 30 minutes and three memorial gardens, (the American Garden, the British Garden, and the Canadian Garden) dedicated to the three main allied nations involved in liberating France. 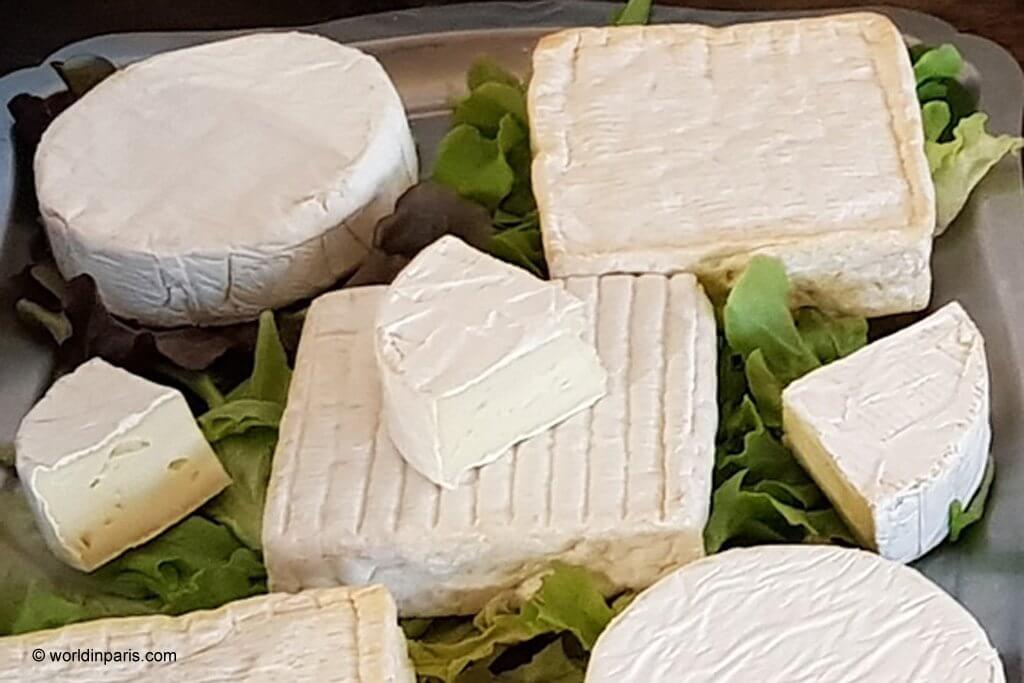 The lunch took place also inside the Museum. The dishes were good, prepared with regional products and washed down with a kir, wine from the Bordeaux French wine region, and water. Our favorite part was the cheese table, with typical cheeses from Normandy such as Camembert or Pont l’Éveque (the square cheese on the picture). The long tables gave us a chance to talk with other travelers in the group and share our impressions.

ABOUT THE LUNCH: the menu at Caen Memorial Museum is fixed and everybody got the same starter, main and dessert. Vegetarians and people allergic to certain food can order a special menu during the tour booking process. If you forgot to book a special menu or you just did not know how to do it, you can always ask it directly to the guide at the very beginning of the tour. 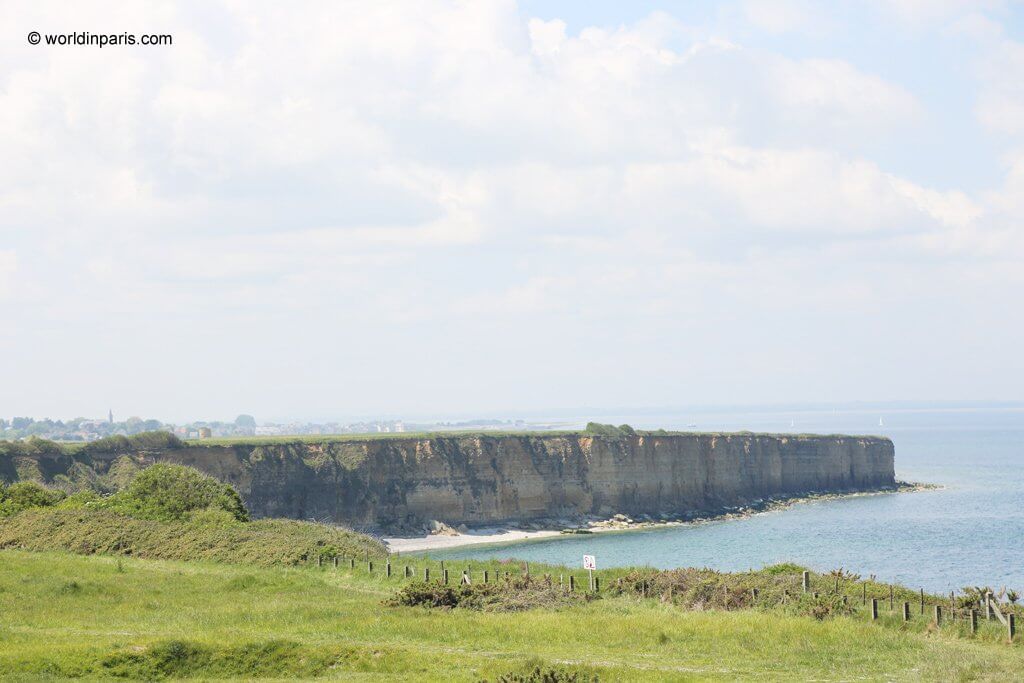 On June 6 Pointe du Hoc was escalated by 225 men of the 2nd American Ranger Battalion with the help of cords, ladders and grappling irons under the shots of the German army. After two days, the Rangers managed to take control of the site at the cost of heavy losses. Subsequently, the Rangers discovered that the artillery pieces were moved by the Germans shortly before and installed 1.3 km behind, inland. 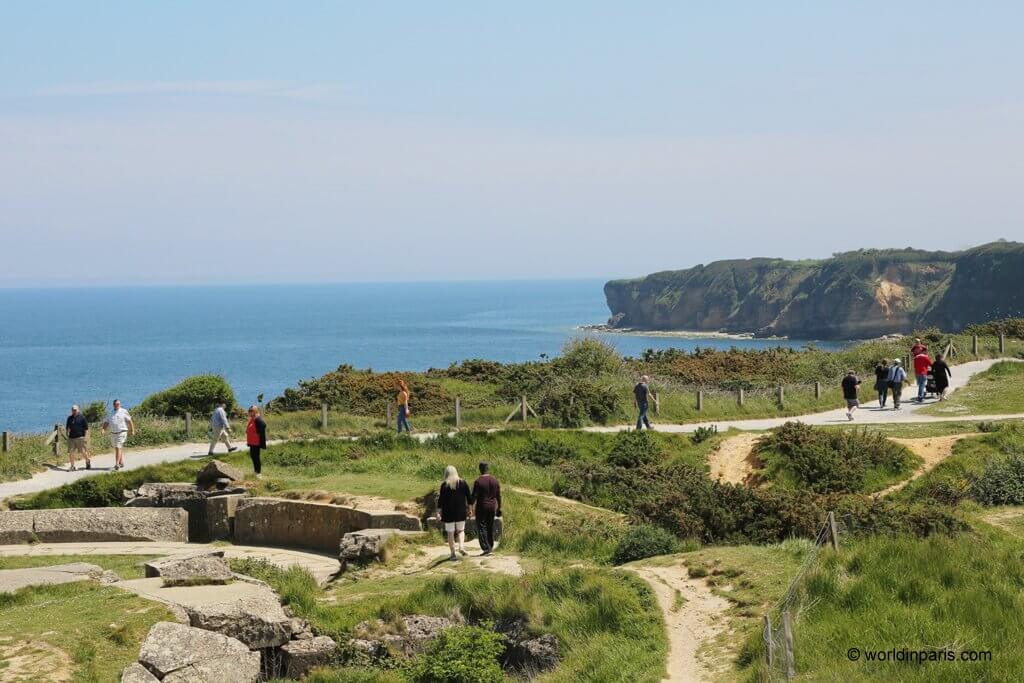 Pointe du Hoc is a very special and incredibly beautiful place. The landscape reminded us of Etretat’s cliffs also in Normandy which inspired painter Claude Monet one century ago. The hills and valleys that you can see on the picture above are not the result of any landscape designer, they are holes and craters made by the explosion of the bombs. In Pointe du Hoc visitors can still see the ruins of the German bunkers. A small trail leads down the hill to Omaha Beach, giving the opportunity to walk across the sand. 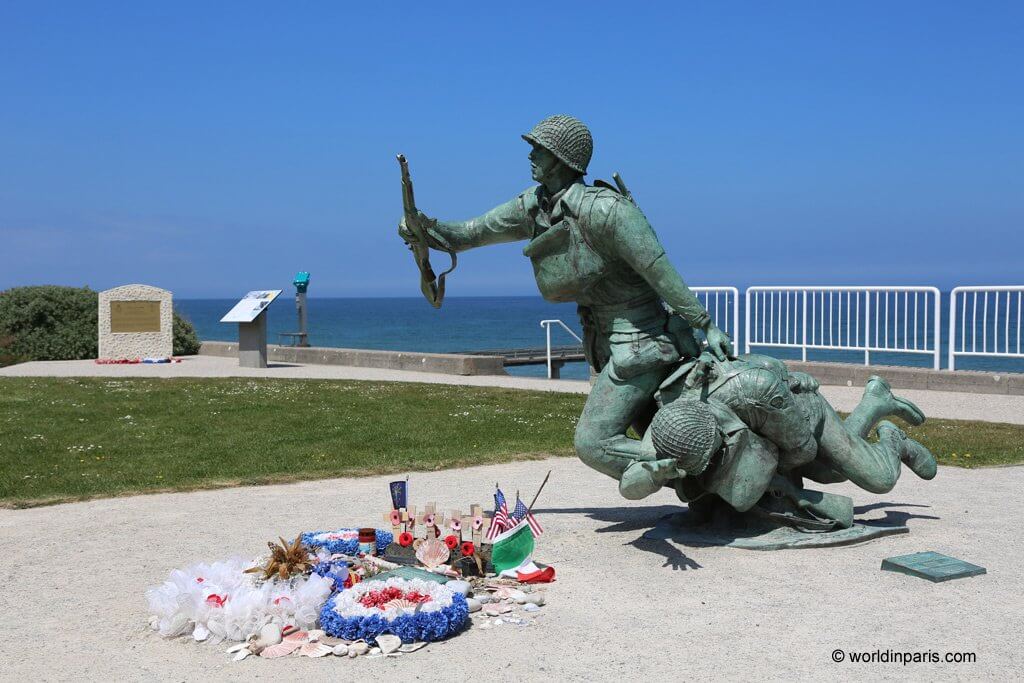 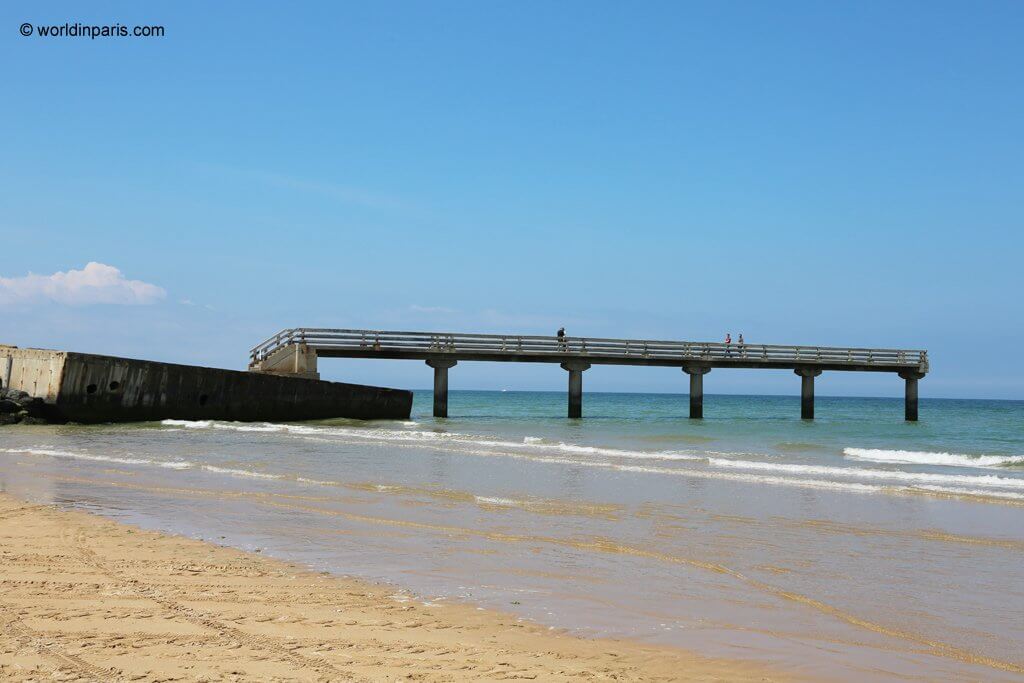 Arromanches is a historic town known for its Mulberry Harbor, one of the two portable harbors built to assist the Normandy landings with armored vehicles and heavy guns. Troops deliberately did not land at Arromanches on D-Day to leave the coast here clear for a portable harbor. On D-Day, this artificial harbor was tugged over from southern England to be put in place, free of any debris. That day this specific Mulberry Harbor (also known as Port Winston) saw the unloading of almost 10,000 tons of equipment.

Mulberry Harbors are one of the best examples of military engineering. Despite being designed to last only three months, Port Winston saw heavy use for eight months. In total, 2.5 million men, 500,000 vehicles and 4 million tonnes of supplies arrived via this Mulberry Harbor. Today its remains are still visible on the beach at Arromanches (picture above). 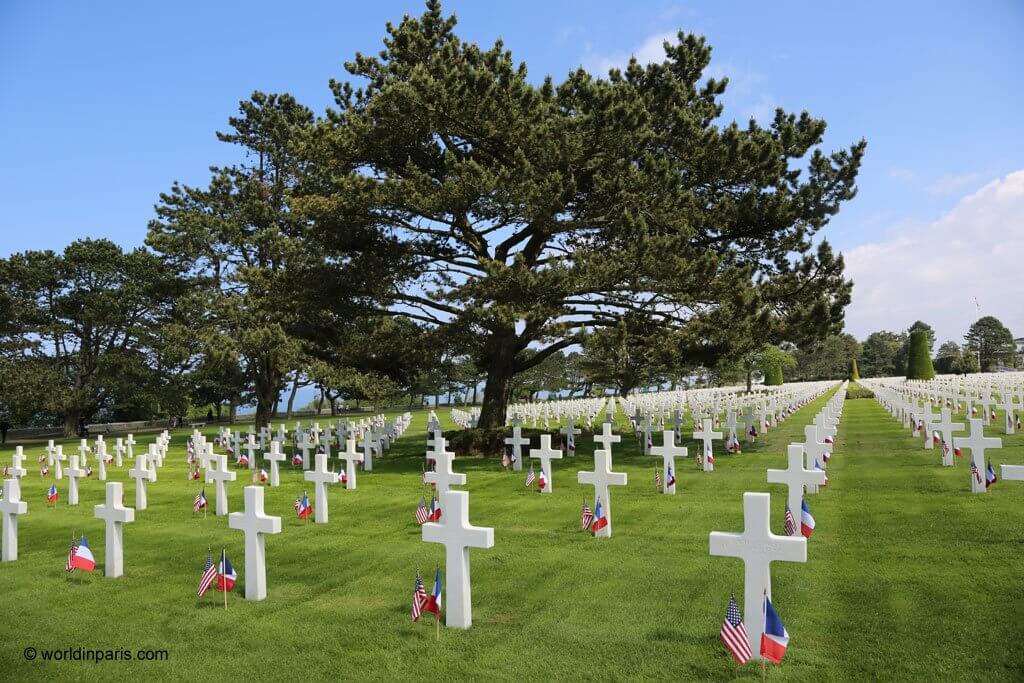 This American War Cemetery and Memorial located in the coastal town of Colleville-Sur-Mer honors American troops who died in Europe during World War 2. The site contains 9.388 burials, most of them for the victims of the D-Day Landings and ensuing battles, and it is the most visited cemetery run by the American Battle Monuments Commission (ABMC). The American War Cemetery was in our opinion the most beautiful site of the tour but also the most emotional. Most of the men who died for our freedom are buried just there. The cemetery overlooks Omaha Beach and, because the French government gave this land to the United States to use forever, it is considered American soil.

Because everybody was immersed in the preparations for the 75th-anniversary events, we could not get close to some spots like the celebrated sculpture “Spirit of American Youth Rising from the Waves”. However, we had enough time to walk around the tombs and enjoy the beautiful sidewalk parallel to the beach. 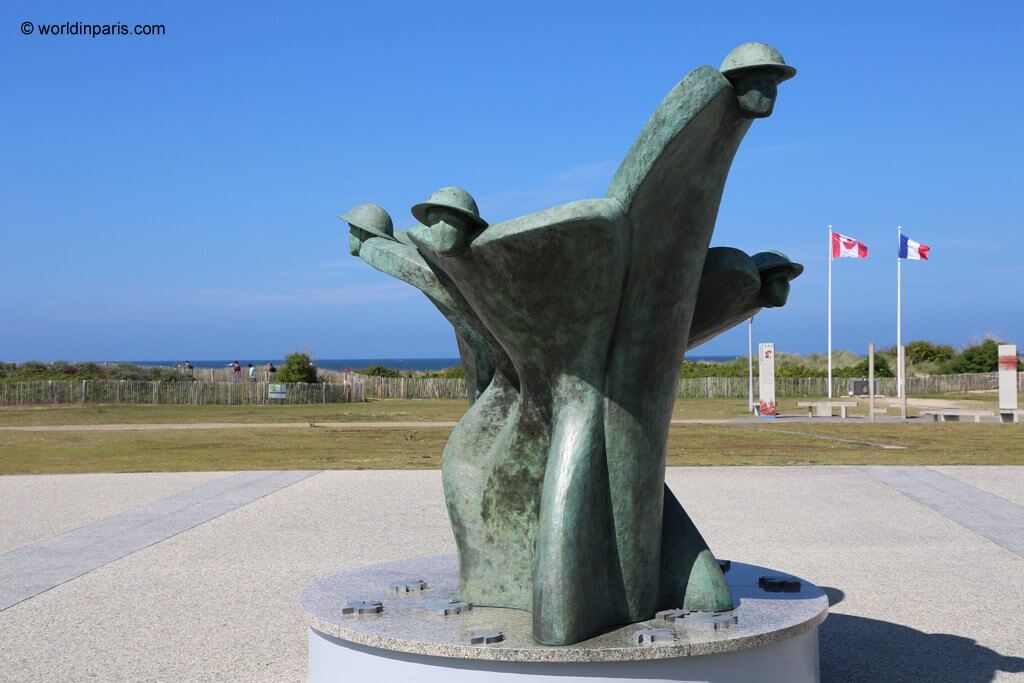 Juno Beach was the codename of one of the main Landing Beaches in Normandy and also one of the best fortified after Omaha Beach. Juno Beach was stormed by the Canadian troops. The delay of the tanks and the bombardments which had left most of the German positions intact led to high losses in the first waves of assault. By midday, the division had completely disembarked and early in the evening controlled Saint-Aubin-Sur-Mer. The following evening, the Canadian forces (21.500 survivors) joined forces with the British troops who had captured Sword Beach. 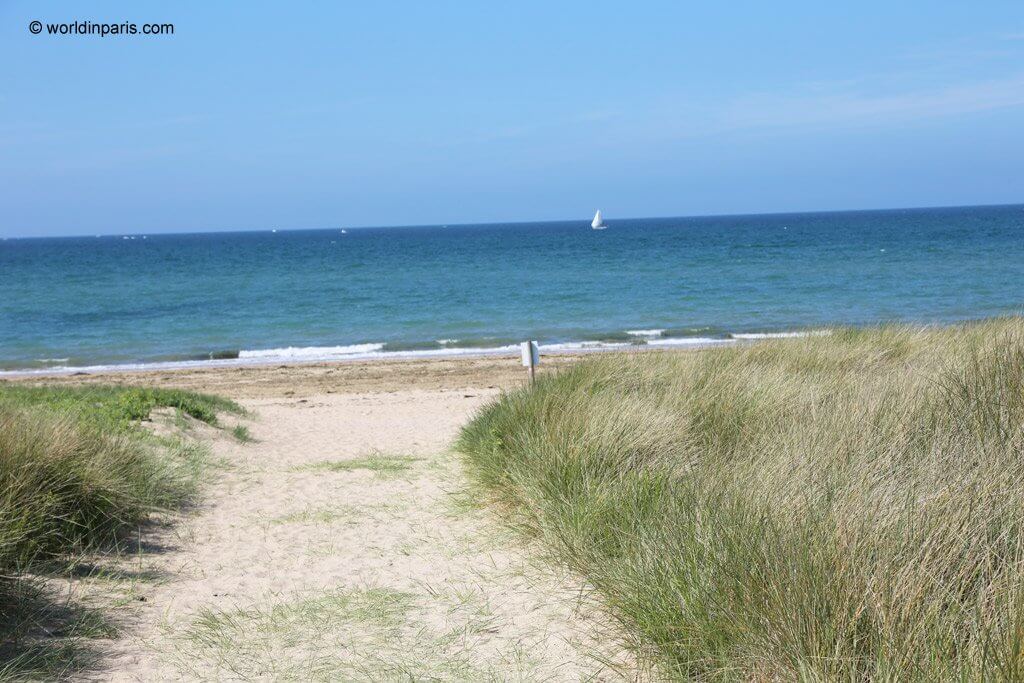 This was the site that perhaps we enjoyed less, probably because it was the end of the tour and we were tired. It was a pity because this beach is wild and beautiful and deserved more of our time and energy. At the entrance of the site, there is the Juno Beach Center which honors the Canadian soldiers who lost their lives for the freedom in Western Europe.

The Canadians who died during the D-Day Landings (around 1.000 soldiers) are buried at the Canadian Military Cemetery of Bény-Sur-Mer /Reviers. This cemetery can be seen from the road to Juno Beach but unfortunately, there was not time to stop.

Juno Beach was the last stop of our Paris Normandy D-Day Beaches tour and from there we started our way back to Paris, where we arrived at 9 pm.

Do we recommend this day tour Paris to Normandy D-Day Landing Beaches? Definitely YES! The trip was well planned and it covered all of the top sites as best it could in only a day. The WW2 sites and D-Day Beaches in Normandy that we visited were very interesting and we had a great time. Agnès, our tour guide, was very knowledgeable and passionate about the topic and she did an excellent job of keeping things on schedule and providing interesting and relevant information to the group. We learned many interesting things about the D-Day Landings and the WW2 in general and also she told us many curious anecdotes about the Landings which are more difficult to find in the history books. Lunch was great, despite we would have appreciated 1-2 different proposals to choose.

On the other hand, the trip was a long day and some people, especially seniors or people who enjoy taking their time, may find it hard to follow. In this case, we recommend booking the 2-day guided tour, with more sites to visit and more time to enjoy them.

Have you visited the Normandy Landing Beaches and other D-Day sites? What are your favorite Normandy War sites? 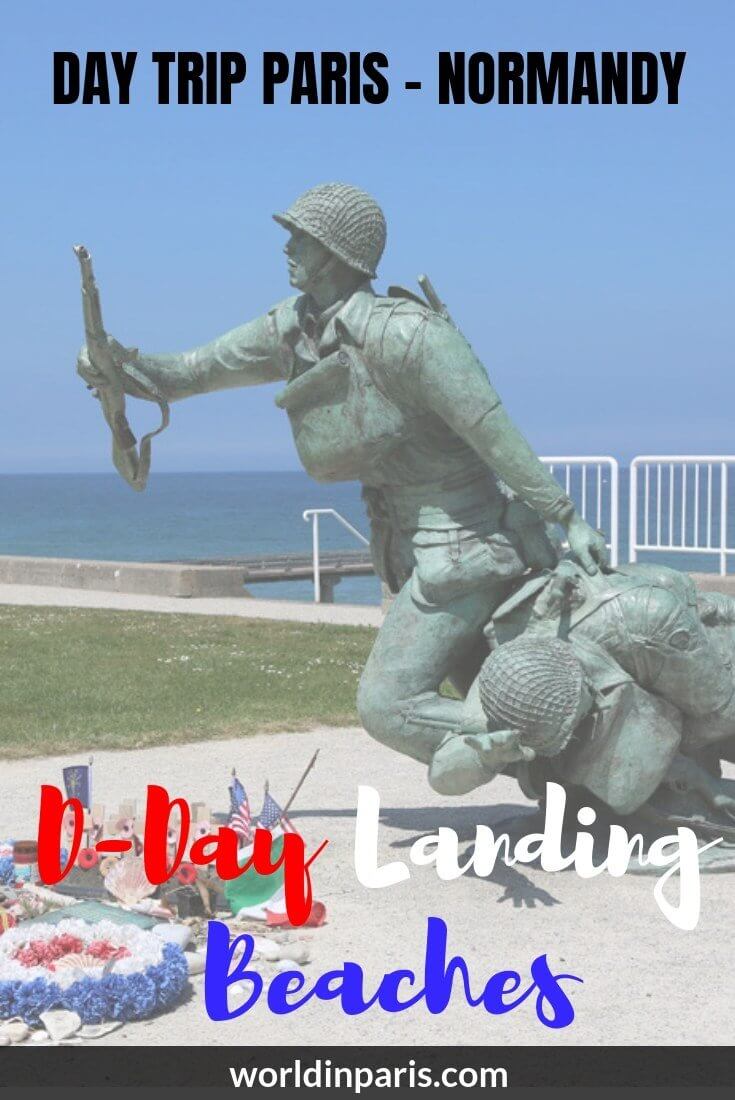